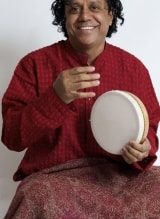 Ganesh Kumar received his initial training on the Mridangam from legendry percussionist Shri T R Hari Hara Sharma and later continued his advanced studies under the guidance of percussion maestro Shri T H Subash Chandran. Upon his advice, Ganesh began to make his primary focus on the Kanjira to master the instrument. Today, Ganesh Kumar achieved greater heights through his spell bounding performances and teachings across the continents.

Ganesh Kumar received the prestigious “Fulbright Fellowship Award” in performing arts for the year 2000-2001, sponsored by the US State Department and the US Educational Foundation of India. During this period he was teaching Kanjira and other Carnatic Percussion at the Queens College, CUNY to the percussion students of The Aaron Copland School of Music, New York. His Fulbright thesis is titled: “Application of Indian Hand Drumming in Jazz Music”. He is the first percussionist from South India to receive this award. He has also received the Maryland State Arts Council Fellowship award for the Folk and Traditional Arts in 2005.

Working with the esteemed Cooperman Drum Company in Vermont, USA, Ganesh released his own signature series Kanjira, under the Artists Innovation Series which he designed. This Kanjira is made out of treated maple wood with tuneable, light weight, utilises a cloth mylar head. Â Now, it is considered an excellent substitute for the original Kanjira, which uses the now endangered Monitor Lizard skin. Ganesh released this new synthetic version Kanjira at the Percussive Arts Society (PASIC) convention in 2004 at Columbus, Ohio.

Ganesh Kumar also released ”The Art of Kanjira” a two volume set instructional DVD, a first of its kind, teaching the basic and advanced techniques of Kanjira, including history, traditional classical compositions, rhythmic counting systems (thalam), and applications outside of Carnatic music.

Ganesh has also introduced the Kanjira to the western audience through his performances and recordings with many Jazz musicians such as Victor Wooten, Bela Fleck, Fareed Haque, John Wubbenhorst, George Brooks, Steve Smith, Paul Horn and others.

As a dedicated teacher, he taught many students in India, USA, Europe and other countries. He currently teaches through the New York Jazz Workshop. He also gave master classes and workshops on South Indian Carnatic Percussions at many universities such as New York University, California State University – Sacramento, Southern Oregon University – Ashland, University of Nebraska at Omaha, University of Hartford – Connecticut, Wichita State University – Kansas, in the Julliard School of Music, The New School of Music, UN International School, Queens College, Wagner College in New York. Performed and presented workshops at the Percussive Artists International Convention (PASIC) during 2005 and 2007 conventions. He has also gave master class at the University of Salerno, Naples,Italy.