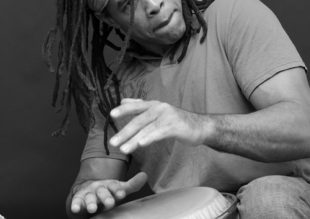 – Identify the individual students technical and creative needs/ identify the students proficiency level- beginner to advance, or profesional- (Reading sound, endurance, knowledge of styles, time feel, improvisation skills)
– Develop a logical framework that can fulfill those needs
– stimulate and enhance creativity
– Stimulate and enhance each students own personal voice
– Work on repertoire
– The student will develop an understanding of the function of the hand percussion-latin percussionist within the rhythm section and ensemble setting
– Guide each student through the process of attaining their personal goals
– Mr. Thoms believes that the percussionist should have a thorough understanding of as many styles as he can and should be able to work within as many types of ensembles as possible.

Born in Colón, Panamá, Renato Thoms began his music training at the Conservatory of the National University of Heredia in Costa Rica. After earning a Bachelor of Music Performance degree at Berklee College of Music where he received a musical merit scholarship, Renato received his Master of Music degree in Jazz Studies at The Boston Conservatory in 1998. He also received the Berklee College of Music Professional Performance Division Latin Percussion Award for Outstanding Musical Ability in the Area of Latin Percussion Performance, was awarded Who’s Who Among Students in American Universities and Colleges and was a finalist in the 2000 Thelonius Monk Hand Drum Competition.

In addition to the Latin and jazz idioms, Renato enjoys playing a variety of percussion styles including classical, pop and R&B which has allowed him to be in different arenas such as being a cast member-musician of the 2005 Broadway production of the Mambo Kings and playing the 2006 Latin Grammy Awards at Madison Square Garden with Ricky Martin. His recording credits include Eric Reed, Antonio Hart, Harvie Swartz, Edú Tancredi, Hilton Ruiz and The Boston Pops.

As an educator, Renato is a lecturer of Latin American percussion at Carnegie Hall. He has lectured and taught master classes at Holy Cross University, Rutgers University, LaGuardia Community College, Princeton University, The Crane School of Music and Conservatorio Superior de Música in Spain. Renato conducts and directs the after school Afro-Caribbean percussion programs at Wingspan Arts and PS87. He is currently on tour with Sol y Canto and Playing with many other groups in NYC, also he is very active in the recording scene.