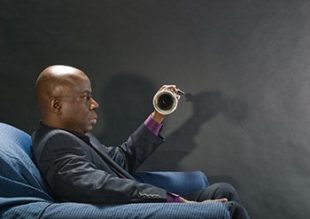 My areas of expertise are extended techniques and various aspects of sound production:

I will also help students develop a concept for playing solo (unaccompanied). We will examine the solo saxophone concepts of Steve Lacy, Evan Parker, and Anthony Braxton. Many of these topics that I teach are intended for advanced students, however, they have proven beneficial for beginner and intermediate students, too.

Saxophonist Sam Newsome is a soprano saxophone specialist. Since making the soprano his main instrument almost 20 years ago, he has established himself as one of the more important soprano players of his generation. Newsome has been nominated by the Jazz Journalist Association (JJA) as “Soprano Saxophonist of Year,” several years in a row, and has consistently placed in the top 10 in the Downbeat Critics Poll in the “Soprano Saxophone” category.

Newsome, who made a name for himself as a tenor saxophonist in the Terence Blanchard band in the early nineties, has moved away from his hard bop roots and now embraces more experimental and avant garde concepts. Newsome hit his artistic stride in 2007 when he began releasing a series of solo saxophone recordings, beginning with Monk Abstractions (Some New Music). Mark Corroto from All About Jazz wrote: “Newsome expands the sound of a single soprano saxophone into a one man band.”

Today, in addition to being associate professor of jazz studies at Long Island University’s Brooklyn Campus, Newsome continues to tour, record and develop new ways to explore the soprano saxophone’s sonic terrain. His latest as well as his fifth solo saxophone outing is titled The Straight Horn of Africa: A Path to Liberation – The Art of the Soprano, Vol. 2 (Some New Music) has been described by Ed Enright, DownBeat Magazine as “a modern masterpiece.” ★★★★ 1/2

Newsome is also a frequent collaborator with many creative musicians on the New York jazz scene: pianist Ethan Iverson, drummer Francisco Mora Catlett and AfroHORN, The Collective Identity Saxophone Quartet, violinist Meg Okura and her Pan Asian Chamber Jazz Ensemble, and he is a member of the new project by The Bad Plus: Science Fiction: The Music of Ornette Coleman—other members include alto saxophonist Tim Berne and trumpeter Ron Miles.