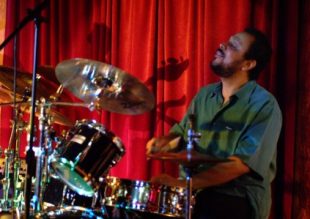 The drummer, percussionist, composer and instructor Vanderlei Pereira, quickly became one of the most sought-after musicians on the contemporary Brazilian jazz scene. Combining a prodigious knowledge of Brazilian rhythms, Vanderlei has captivated audiences IN Brazil, north America, Europe and Asia. He’s proficiency on the drumset extends beyond his mastery of Brazilian rhythms. While still living in Brazil, He was selected as a student of the Orquestra Sinfônica Brasileira Academy in Rio de Janeiro, where his studies included classical percussion. During this period, Vanderlei performed with the Orquestra as well. He received a Diploma in Jazz Studies from the Mannes College of Music in New York City. He has incorporated these diverse influences into his playing and, as a result, has earned the respect of both straight-ahead and Latin jazz musicians on the demanding New York scene, where he is admired for his musical versatility., Just to name a few, he has appeared and recorded with numerous outstanding artists including Toots Thielemans, Airto Moreira, Flora Purim, Rosa Passos, Leny Andrade, Claudio Roditi, Romero Lubambo, Bebel Gilberto, Sivuca, Johnny Alf and Beth Carvalho. While he is very busy at the present with his teachings and performances as sideman he manages to lead his own exciting New York based, Brazilian Jazz band project called Vanderlei Pereira and BLINDFOLD TEST.