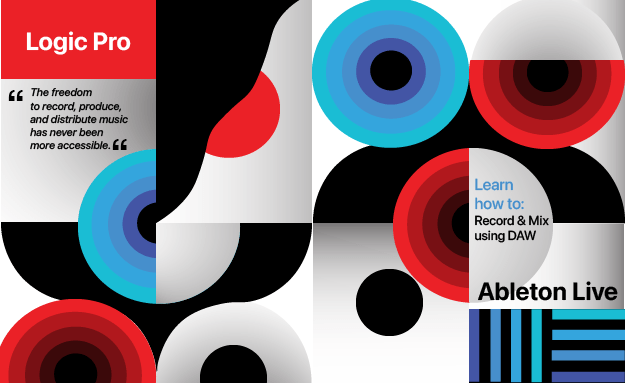 Learn to record and mix your own music, right from home, using DAW’s.

I always feel very fortunate to be pursuing music in this current time. The freedom to record, produce and distribute one’s music has never been more accessible.

That is why it is imperative for musicians to be familiar with the different DAWs and how to record themselves properly. I personally encourage players to take another step further and learn the ins & outs of production. That includes using midi instruments, creative use of effects, drum programming and editing audio/midi takes to create amazing arrangements all within the program.

The combination of physical instrument knowledge and digital production skills unlocks incredible possibilities that can help push anyone’s musical boundaries further. It also allows the player to become self-sufficient. And while collaboration is an amazing part of music, not having to pay for studio time or rely on someone else’s schedule can eliminate a lot of hassle for someone who wants to get their ideas out asap!

We will be using Ableton Live & Logic Pro. Both have different, but very important functions in my process. I start all ideas within Ableton, because that specific DAW has a very intuitive interface that can allow the producer to use it more like an instrument than a recording software. It has audio warping capabilities that are unmatched, fairly decent stock instruments, incredible stock effects and very flexible automation capabilities. All those aspects help the user create sounds that wouldn’t be possible in a traditional studio setting and much harder to recreate in DAWs like Logic or Pro Tools. Ableton also has recording capabilities like those other programs, but because of its modern interface, I personally believe that it falls short in that department. That’s where Logic Pro comes in!

Logic, like Pro Tools, is based on traditional recording environments. There is a mixer window that acts as your console, where you find easy ways to route your tracks to different buses and auxiliary tracks, similar to how you would on a physical deck. Ableton has these capabilities too, but you are limited to ~14 sends/returns, where Logic has 127. The recording/mixing possibilities are endless. Because of this I use Logic to record all my vocals, horns, drums and anything that doesn’t have direct input capabilities. After that I will then bounce those recordings back into my Ableton session, where I will continue to flush out interesting arrangements and musical moments!

Maximum of 10 students per class, so act fast to reserve your spot.

When:
January, either Sat or Sun. First date TBA – ask about our next starting date
Where:
Online via Zoom
*Each Class will be recorded for students to access at any point.
Cost:
10 one hour sessions : $475

Charlie Heimes is a multi-instrumentalist, producer and audio engineer whose influences range across many genres and communities. Studying Music Production at Icon Collective and Jazz Piano at The New School, Charlie has developed a unique, hybrid perspective to music creation. Combining technological experimentation and traditional music knowledge as a means to discover creative sounds, he takes a cumulative approach to his work. His focus primarily lies in record production, creating cohesive pieces of music that work in tandem to tell a story and become a larger themed work of art.

Alongside his personal creations, Charlie has experience working in multiple areas of the music industry. From engineering at Fab Factory Studios to composing for picture at The Elements Music House, he has been able to work under amazing minds who put an emphasis on having a strong understanding of DAW’s, production and all the tools available for use today.

Currently, Charlie’s work consists of producing for two bands, finishing up an 10 song album and doing various audio work for creators and companies alike. He remains committed to furthering his education, explorations of sound and continuing to be a student of the craft.”