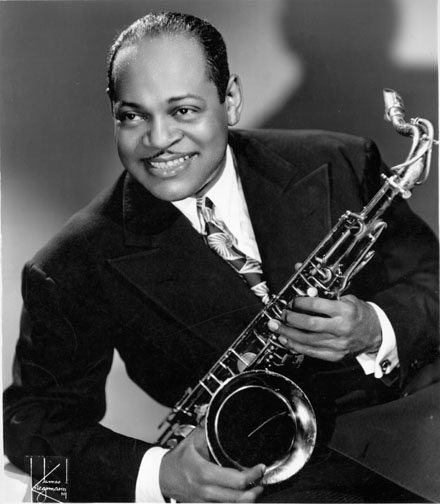 When discussing artists at the forefront of their fields and then embracing change, naturally adapting with their own voices names such as Coleman Hawkins immediately come to mind.  Born in 1904 and affectionately nicknamed Hawk or Bean, the young Hawkins started his journey on cello and later switched to tenor saxophone.  Prior to Hawkins, the saxophone was seldom used in Jazz and we must be grateful that Hawkins brought the tenor saxophone upfront.  Considered the creator of the ballad in Jazz,  Hawkins joined Fletcher Henderson’s Orchestra in 1929.  Ten years later, Hawkins made a huge advancement in the music.

Jazz had relied on melodic improvisations, an avid lover of classical music, Hawkins expanded the pallette of Jazz musicians.  His 1939 reading of the Green-Sour-Heyman penned “Body and Soul” was an exercise in harmonic improvisation.  Harmony relies on the chords rather than melody, Hawk’s terrific flights on the tune were precursors to the style of playing of which John Coltrane shook up the Jazz world with two decades later.  The following year, Bean was at the center of a revolution and ceased operation of his big band.

The revolution was bebop.  Bebop a new style in which melody took a backseat to improvisation, investigations of harmony and unusual harmonies used by the likes of Stravinsky, Ravel and Debussy. Tempos accelerated to Autobahn levels.  Rather than the high hat keeping time, time was moved to the cymbals allowing the drummer to freely provide commentary with his or her left hand on the snare and toms, dropping “bombs” on the kick drum.  Hawkins participated in the first bop session with Max Roach on drums and Dizzy Gillespie on trumpet, extending the bridges that musicians such as trumpeter Roy Eldridge walked with the swing to bop stylistic change.  He collaborated with the ultimate of Jazz’s avant-garde, the High Priest of Bebop, pianist Thelonious Monk.  It is particularly instructive to hear  Hawkins side by side with John Coltrane on Monk’s classic 1957 Riverside album “Monk’s Music” on “Well You Needn’t”. The old and new schools blended together, with the old guard (Hawkins) adapting and learning new tricks.

Hawkins toured with the immensely popular Jazz at Philharmonic, but his health began a steady decline as he fell deeper into the abyss of alcoholism.  He died on May 19, 1969.