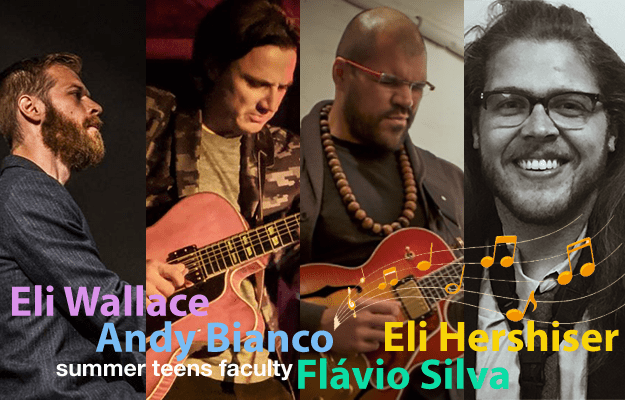 Andy has performed his original jazz compositions as a bandleader & with other groups at such NYC jazz hot spots as Smoke Jazz Club, Minton’s Playhouse, Cornelia St. Cafe, The 55 Bar & The Zinc Bar-In addition his music has been licensed for use in Hollywood film & prime time network television.  He has completed a 6 month tour of New Zealand & Japan as the guitarist with the critically acclaimed stage production entitled, “Empire” & is also a private instructor with New York Jazz Workshop & a teaching artist with Wingspan Arts & Midori & Friends in NYC.  Andy is also an advocate for music & education & has created the Phillip Bianco Memorial Music Scholarship which annually awards a substantial monetary sum to young adult music students through the Keynotes Foundation Scholarship Competition in Pittsburgh.

Teaching Philosophy: Having studied/worked/performed with some of the world’s finest guitarists, musicians & artists I’ve developed a teaching philosophy that incorporates a vast array of approaches that are tailored to the needs & goals of each individual student. During the first lesson I perform a detailed assessment & together with the student create an action plan that is based off that specific student’s objectives & strengths. That way we can maximize time & learning experience. The goal identification/progression/completion of the student & the achievement of their objectives are what is paramount to me as a teacher (& also that they have fun!).I prefer to utilize holistic approaches to learning such as meditation, self reflection, breathing/stretching/injury prevention techniques, personal care/health & wellness, playing together, imitation, call & response, musical games/challenges, Eastern/Western historical approaches & attitude/confidence cultivation.

Kana Miyamoto Kana Miyamoto is a New York based flutist, educator and a composer originally from Chiba, Japan. Kana released her debut album “Spring Doze” which already has been getting reviews from magazines and WNYC-FM. Her performance is strongly influenced by Ian Anderson, Huber Laws, and Joe Farrell.

Kana moved to New York in 2014 to pursue a performance degree from the New School’s Program for Jazz and Contemporary Music. Kana studied with Steve Cardenas, Billy Harper, Richard Boukas, Marc Mommaas, Jamie Baum, and joined Hudson Jazz workshop in 2015 as a fellowship student. Her 1st Kanacept album ‘Spring Doze’ released in 2017 and they went to Japan tour in 2018, went 6 places at Tokyo and Kansai Area. In 2019 Kana joined the New York Jazz Workshop as a flute faculty and experienced performance for Swing into Spring Jazz Festival in Stony Brook. In January 2020, Kana performed duo with Takaaki Otomo at Residence of Ambassador, Consulate General of Japan in New York and released Kanacept second mini-album ‘‘Dancer in the Galaxy’. Kana released “In the Forest~ Flute and Kora Field Recording Project~ in 2021. Check out my website for more!

Sunhyun Yoon Sunhyun Yoo is a Korean jazz saxophonist, composer, and educator based in Brooklyn, New York. He was the grand finalist of the Jarrasum International Jazz Competition. He has performed with the giants in jazz such as Billy Harper, Eddie Henderson, Randy Weston, Joe Lovano, Alex Spiagin, Dave Pietro to name a few.  In 2019, he released his debut album as a leader entitled “Meanings” consisting of Grammy award-winning trumpeter Michael Rodriguez, Letter One award-winning vibraphonist Sasha Berliner, drummer JK Kim, bassist Hwansu Kang, and pianist Guy Moskovich. Currently, Sun is the saxophonist of Neo-soul band “Mongaif”, and the alto saxophonist of “NYJW Saxophone Quartet,” while leading his own group.

From a young age, Sun was singing, performing, and playing a classical clarinet. Throughout the course of their musical career, Sun has won over the hearts of music lovers from all walks of life; performing at a variety of venues, making loads of public appearances, all the while recording new music. Learn more by exploring my website!

Eli Hershiser is an emerging saxophonist and composer based in New York City. Born and raised in Omaha, Nebraska, he was introduced to the music of Bob Dylan, Neil Young and The Rolling Stones by his father. Hershiser had a natural ear for music and began to gravitate towards the saxophone with the passionate influence of several mentors. As he began to take himself more seriously as a musician, his knowledge and appreciation for the tradition of jazz music blossomed. Sonny Rollins, Dexter Gordon, Thelonious Monk, and John Coltrane have consistently influenced Hershiser’s playing, while his compositional style and technique stem from an array of music, including his intense love for the great classical composers such as Bach, Johannes Brahms, Strauss, and many more. Eli is continually working towards merging his tastes together to create evocative and fresh musical works.

Teaching Philosophy: With more than 4+ years of private and group instruction, I have developed a unique approach to helping each instrumentalist develop and cultivate their own voice, while including important elements of theory, ear training, improvisation and fun!

I strongly believe that each instrumentalist has their own path and best-working methods to improving on their instrument. My goal is to help my students work out a practice routine and learning plan that is catered to their strengths and their musical goals! Together, we will determine where to start and how to build your routine over time so that we both see success and improvements. Fundamentals of music are the absolute necessary building blocks to succeeding in other areas such as Sound, Improvisation, and especially Individuality and Expression. More importantly, enjoying the process and having fun along the way is paramount in your musical journey!