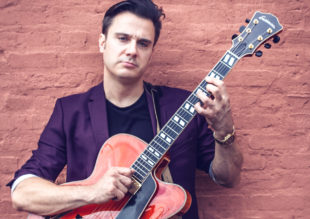 Teaching Philosophy:
Having studied/worked/performed with some of the world’s finest guitarists, musicians & artists I’ve developed a teaching philosophy that incorporates a vast array of approaches that are tailored to the needs & goals of each individual student. During the first lesson I perform a detailed assessment & together with the student create an action plan that is based off that specific student’s objectives & strengths. That way we can maximize time & learning experience. The goal identification/progression/completion of the student & the achievement of their objectives are what is paramount to me as a teacher (& also that they have fun!).I prefer to utilize holistic approaches to learning such as meditation, self reflection, breathing/stretching/injury prevention techniques, personal care/health & wellness, playing together, imitation, call & response, musical games/challenges, Eastern/Western historical approaches & attitude/confidence cultivation.

“NYC Stories aims at depicting a sense of triumph over adversity, which comes through on album opener ‘For Those Who Battle Demons’….New York might be the most written about city in the country, but Bianco still has stories of his own.”-Chris Barton, “NYC Stories” review, Downbeat Magazine, June 2020.

“Judging by the jut of his shoulders, clench of his jaw and verve of his writing and playing, Bianco will soon be back with some more stories.”-Tom Greenland, “NYC Stories” review, New York City Jazz Record, April 2020.

“One wishes McLaughlin would hire Bianco as his tonal guru, as the latter’s sound is closer to the Mahavishnu Orchestra than anything McLaughlin is doing these days…”-Stanley Zappa, “Forces of the Wild” review, New York City Jazz Record, August 2013

“A terrifying and intense journey.  Love it!” -Jazz guitar master Ben Monder (referring to “Forces of the Wild”)

“Andy Bianco is a very fine guitarist with a natural spark. His playing embodies strong elements of the past and the future.”-Jazz drumming master Bob Moses