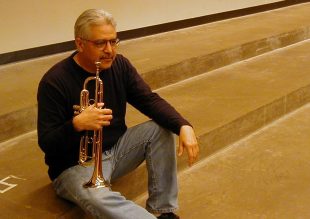 Philosophy:
I have had over three decades of teaching experience. Obviously I feel that my ability to teach and convey musical concepts and techniques has evolved in many ways over that time span. As a teacher of jazz there are many areas that I need to address. First of all the basic fundamentals of playing the instrument are necessary as well as a strong knowledge of theory and harmonic structures. In addition there is the encouragement of the creative process that accompanies improvisation. When a student first comes to me I feel my responsibility lies in simplifying sometimes complex and abstract ideas and presenting them in a fashion that a young and inexperienced musician can understand and comprehend. In my many years of teaching I have found that a student needs to experience progress and be able to utilize the material at hand in order to be motivated.

Most importantly, I feel that I am there to set an example for the student. My musicianship, personal work ethic and dedication can serve as an inspiration. My ultimate goal is to instruct the student to be his/her own teacher. If a student experiences enthusiasm and excitement and has a depth of understanding of the process then they will be motivated to explore outside of the classroom and studio.

It is extremely rewarding and I feel a strong sense of personal gratification when my students, be it an individual or an ensemble, reach a level of performance that hasn’t been previously attained.

Dave Scott is an award winning trumpet player with a wide range of professional experience who has worked with some of the greatest jazz artists in the world. Currently residing in New York, Dave has been composing for and performing with his own jazz quintet and also has a new project featuring violin, piano, guitar, bass and drums. He is recognized in the New York jazz community as a prolific composer and his groups feature his compositions exclusively. Both contain some of New York’s finest jazz musicians, including Rich Perry, Gary Versace, Jeff Williams, John Hebert, Ben Monder and Ted Poor. The compositions reflect both specific forms with dense harmonic structures and open frameworks for free improvisation. The focus of both ensembles is to utilize the engaging and often complex compositions as vehicles for improvisation. The pieces develop interactively and organically allowing each musician full individual expression. The quintet released “SONG FOR AMY” on the SteepleChase label in 2004. A second disc for SteepleChase, “NAIVETE’” was released in February of 2007. The first disc received critical acclaim in JazzTimes in 2005 and the second as well in the Jazz Review in 2007, both making note of the originality of Dave’s works. A third disc, “NONCHALANT” was released in the spring of 2009 and received honorable mention for recording of the year in All About Jazz New York. Dave also co-leads a quartet with tenor saxophonist Tony Malaby. The group has a CD released on the Nine Winds label. Many of Dave’s original works are featured on this release as well. All three ensembles perform regularly in the New York City area, and on the Los Angeles County Museum of Art concert series. Dave is also a fine pianist and has been featured as a piano soloist on two of the Kim Richmond/Clay Jenkins Ensemble’s releases “RANGE” and “LOOK AT THE TIME”. He has also been featured as a trumpet soloist on Kim Richmond’s big band CD “PASSAGES”. He has also toured and recorded as a featured soloist with the Jim Widner Big Band.

Dave is currently on the jazz faculty at Western Connecticut State University and formerly at the University of Southern California, Dave directs the jazz ensemble, coaches small ensembles and teaches improvisation to jazz majors. In 1984 Dave was awarded a grant from the National Endowment for the Arts in jazz performance.