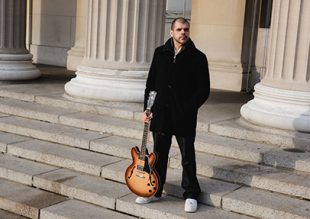 Philosophy:
The instrument, in this case, the guitar, is just a tool to make music. The music is inside each of us and that is what I always look to bring out of every student. There are rules for everything, however, my intention is to help the student to use those rules and make his/her own version of them, always appreciating their individuality and personality.

Flávio Silva is a musician who is part of a new generation of Brazilian composers and instrumentalists that has been breaking through the musical scene of different places, such as Brazil, The Netherlands and most recently, New York.

The guitarist studied with some of the best musicians in Brazil and all over the world, such as Michel Leme, Alexandre Mihanovich, Djalma Lima, Lage Lund, Adam Rogers and Ed Verhoeff, among others.

In 2014, he is releasing his debut album, consisting of nine authorial compositions, he shows some of his skills as a composer, arranger and guitarist. Recorded with some of the best Brazilian musicians, Cuca Teixeira on Drums, Josué dos Santos on Tenor Saxophone, Bruno Migotto on Double Bass, Gustavo Bugni on Piano and Rhodes and JP Barbosa on Alto Saxophone, this record has the modern jazz as it’s main platform, but with different influences that go from Latin Music to Fusion and even some Rock. Flávio is working on a new album, expected for 2018.