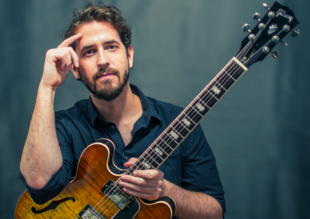 Teaching Philosophy:
My teaching philosophy is to determine my students’ goals, where they want to go with their music, and help them discover their inner voice and continuously tap into it. Accessing your well of creativity is a significant part of learning your voice. I aim to help my students find exciting ways of practicing that unlock who they are as guitarists, composers, and artists.

Described as “a thoughtful improviser with a quiet tone who makes every note count” by Downbeat Magazine and as “an exceptional artist, with a shimmering sense of sonority and the ability to find a keen balance between poetry and intensity” by Latin Jazz Network, Gabriel Vicéns (b. 1988 in Guaynabo, Puerto Rico) is a NYC-based guitarist, composer, and educator who works across a wide range of musical expressions. Vicéns moved to New York City after more than a decade of performing and recording with top groups from the Puerto Rican jazz scene and a four-year professorship at the Interamerican University of Puerto Rico.

Gabriel Vicéns has been featured at venues and festivals such as Heineken Jazz Fest in Puerto Rico, SF Jazz Center in San Francisco, Ljubljana Jazz Festival in Slovenia, Uno Jazz San Remo Festival in Italy, and Havana World Music Festival in Cuba. He has worked with artists such as Miguel Zenón, Alex Sipiagin, John Benitez, Paoli Mejias, Luis Perdomo, David Sánchez, Will Vinson, among others. In New York, he has frequently performed at prominent venues such as The Cell Theater, Cornelia Street Cafe, Latea Theater, Fat Cat, The Owl Music Parlor, and Terraza 7, both as a leader of his own groups and as a sideman. In addition, he is co-leader of the experimental ensemble No Base Trio, with whom, in 2020, released their critically acclaimed eponymous debut album under the label Setola di Maiale.

Vicéns is also a painter; he studied at the Art Students League of New York with renowned color-field painter Pat Lipsky and briefly with Ronnie Landfield. In 2018, he was invited to be part of the group exhibition Dislexia Geografica held at The Clemente Soto Vélez: Cultural and Educational Center, featuring many artists from Latin America. He actively works in the realm of painting alongside his music career.

Gabriel Vicéns received a B.M. in Jazz and Caribbean Music Studies and Performance from the Conservatorio de Música de Puerto Rico, an M.M. in Jazz Studies and Performance from Queens College, and a D.M.A. in Jazz Studies and Performance from Stony Brook University. He has released three critically acclaimed albums as a leader: Point In Time (2012), Days (2015), and The Way We Are Created (2021). His last record incorporates compositions influenced by folklore music from Puerto Rico, featuring saxophonist Roman Filiú, pianist Glenn Zaleski, bassist Rick Rosato, drummer E.J. Strickland, and percussionist Victor Pablo. Currently, Vicéns is working on various projects, including his fourth studio album, which will highlight him as a composer of concert music.