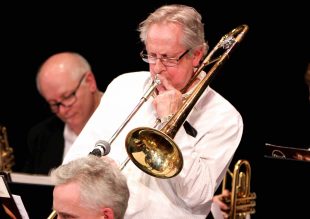 Trombonist Glenn Mills has been active in New York City as a performer, arranger/composer, and educator for four decades. After serving as a musician in the US Navy, he arrived in New York to study at the Manhattan School of Music where he earned a Bachelors degree in classical performance. This was the golden age of Salsa, and he became active performing and recording with Larry Harlow, Bobby Valentine, Johnny Colon, and Celia Cruz. He was also recording frequently in the R and B field. He also performed and recorded with the rock band Ambergris, and later toured extensively with Gloria Gaynor.

Glenn has also worked as a backup musician for the Supremes, Jay and the Americans, the Big Apple Circus, the Larry Elgart Orchestra, and the Widespread Depression Band. He has a Masters degree in Jazz Composition from the Manhattan School of Music, studying with Bob Brookmeyer. He also completed a Masters degree in Music Education at Lehman College. He was a founding member of the BMI Jazz Composers Workshop. He has received 3 awards from the National Endowment for the Arts. As an educator, he taught as an adjunct at Lehman College, at The Harbor Magnet Junior High School for the Performing Arts, and at the Elaine Kaufman School.