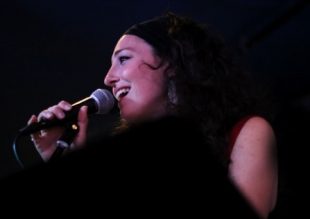 Topics:
I teach beginners and intermediate voice students. My lessons generally include a combination of vocal technique and breathing exercises, while touching on topics such as: style, rhythm, interpretation, verbal/nonverbal communication, repertoire, phrasing, ear training and improvisation.

Philosophy:
Every human being is involved in song at some point in time. As a beginner and intermediate voice teacher, I strive to provide students with the tools necessary to achieve his or her singing goals by promoting healthy and thorough development of the singing voice. Every student will ultimately follow his or her own individual path when it comes to vocal training. I feel it is my job, as a voice teacher, to inspire students to explore their own vocal potential and gain control over vocal technique by understanding more about breath and support.

“Foschi is today’s vocalist, blazing the trail for a new style of jazz vocals, not adhering to traditional sounds or rhythms, but appealing to a new generation of listeners, while still honoring jazz as a tradition. She is truly original and far from the norm as a composer and as a vocalist.” ~ H. Allen Williams, JazzTimes, May 2013

Olivia Foschi was born in San Francisco and grew up in Italy. She started studying music as a child and her stylistic approach to singing shifted in 2001 when she was given the opportunity to study classical Nepali voice with well-established singer and composer Aavaas in Katmandu. This experience brought immense musical inspiration and left her eager to explore her voice paying particular attention to color and rhythm. She moved back to Italy in 2002 and earned a B.A. in English Literature (cum laude) at John Cabot University in Rome while continuing to take voice lessons with Luisa Cottifogli (Imola). In 2005, she moved on to study jazz voice with Cecilia Izzi at the University of Music in Rome and nonverbal communication with established singer/songwriter Grazia Di Michele. Since then, she attended countless music seminars and workshops both in Europe and in the U.S., and took classes at the Academy of Music in Bologna. In 2009, she opened for E.C. Scott presenting her project Liv’n’Symposium and won the vocal competition that took place during the “Jazz Women in Blues” festival (promoted by Naima Club, Forlì, Italy). She was awarded full scholarship at the Venice Voice Academy in L.A. for the 2010 summer-session and subsequently moved to New York. Olivia released her debut album entitled Perennial Dreamer in March 2013, produced by Ulysses Owens Jr. and continues to train with Abiah and Ganesh Kumar. She collaborates with very diverse musical projects and covers a variety of different styles including jazz, funk, dub step, folk and bossa nova. Olivia has performed throughout the US and Europe, sharing the stage with Chris White, Warren Smith, Joseph Jarman, Thurman Barker, Ulysses Owens Jr., Stacy Dillard, and Lou Caputo among many others.