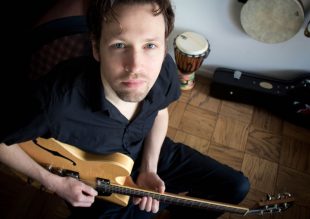 Philosophy:
While all of the above mentioned topics are important, guitarists sometimes tend to focus on the technical aspect of their instruments to an extent that makes them forget that jazz is primarily a language, a means of communicating ideas, in the moment. As a guitarist I am very much aware of this and address it in all my lessons. Learning the language is not a means in itself, it serves the purpose of expressing the inner spirit of our personalities.

Guitarist and composer Sebastian Noelle has been an active member of New York City’s multi-faceted creative music scene since 2002, performing at venues such as 55 Bar, Cornelia Street Café, The Blue Note, Jazz Gallery, Iridium, Merkin Hall, Tea Lounge, The Knitting Factory and the Jazz Standard. He has released two CDs on the European FreshSound-NewTalent label: “Across The River” (2006), featuring Donny McCaslin, Ben Street and Ari Hoenig, and “Koan” (2011), with Loren Stillman, George Colligan, Thomson Kneeland and Tony Moreno. He is exploring new ways in improvisation using microtones, ragas and rhythms from the Balkans and the Middle East.

Noelle has played at numerous big jazz festivals such as Newport, North Sea, Montreux and Moers, and has toured in the US, Canada, Holland, Germany, Brazil, Japan and Slovakia.