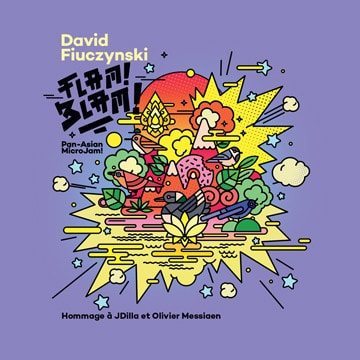 David Fiuczynski (“Fuze”) is one of the most open musicians in any genre. The guitarist, who is also a professor at Berklee and the recipient of the 2011 Guggenheim fellow award has played with everyone from keyboardist John Medeski on the classic Lunar Crush (Gramavision, 1994) funk icon Bernie Worrell’s Woo Warriors, Hiromi Uehara in her Sonicbloom band to Hacidic New Wave. Fuze, most known for his genre bending Screaming Headless Torsos, released a new project March 25th for London’s RareNoise label entitled Flam! Blam! Pan-Asian Microjam. The followup to 2012’s Planet Microjam is inspired by French composer Olivier Messaien, and the beats of the late visionary hip hop producer J Dilla. Fuze blends his unique concept of microtonality on this album combining through composed and freely improvised elements, with three tracks featuring the searing alto saxophone of Rudresh Mahanthappa. I spoke with the guitarist about the album, his microtonal concept, music education and an upcoming session he is recording with legendary drummer Jack DeJohnette, and Georgian microtonal keyboard star Giorgi Mikadze among the cast.

My thanks to gracious, wonderful, humble David Fiuczynski for taking time out of his schedule to speak with me and to Antje Hubner and Gille Amaral for coordinating this interview.