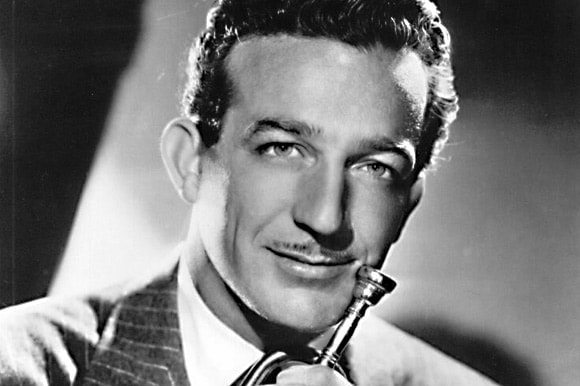 Trumpeter Harry James was very popular with his mainstream sound.  James was born in Albany, Georgia and began his career by playing with the Ben Pollard group.  James then followed into Benny Goodman’s group and became a favorite for his verbose trumpet playing.  In 1939, James formed his own band, the Melody Makers (whom Goodman financed) and the outfit became very popular, notable for utilizing a young vocalist named Frank Sinatra.  James’ hard swinging band sound was met with trepidation  particularly on the West Coast, and by the early 40’s adopted a string section for middle of the road fare.

Columbia Records signed James  and recorded “You Made Me Love You” and many other popular songs.  His popularity reached an all time high when vocalist Helen Forrest was added to the ensemble, and soon after James met actress Betty Grable whom he married in 1943.  At this time, World War II was in full swing and James was considered duty ready, after most of his band was drafted.  James was found ineligible for combat and reassembled a portion of his band.  When big bands ceased to be economically viable in the middle of the back to small group bebop period, James exited music.

James came out of retirement in 1947 and continued to front various bands.  James passed away days after his last performance in 1983.  He will always be remembered for his successes and remains a vital part of swing’s legacy.

One thought on “Harry James”