Lines In The Sand: Antonio Sanchez In Conversation with CJ Shearn 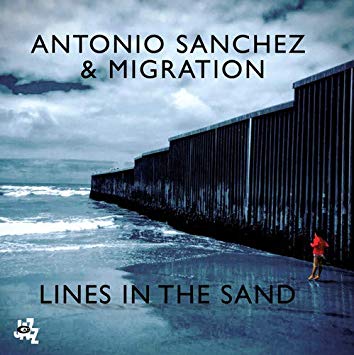 Antonio Sanchez has been one of the leading lights of the drum scene for 20 years, having made his debut with Danilo Perez and in 2001 joining current employer, Pat Metheny. Sanchez has made his mark as a composer having won a Golden Globe for the score to the Alejandro Gonzalez Inarritu directed, Oscar winning  Birdman, scoring the TV series Get Shorty, and as a sonic explorer recording Bad Hombre.  On January 26th, Sanchez releases Lines In The Sand on CamJazz featuring a revamped Migration with Thana Alexa on voice and effects, Chase Baird (replacing Seamus Blake) on tenor and EWI, keyboardist John Escreet and bassist Matt Brewer.  The album is a powerful lament on being an immigrant, in which Sanchez brings his instrumental, composition and production skills to a unified whole in a brilliant album length display.  We discuss the album, it’s production, compositions and future direction of his music.  My thanks to Antonio Sanchez for scheduling time in the midst of a busy schedule and Gille Amaral at Dog And Pony Industries for coordinating it.  Additional thanks to Jason Isaac for assistance in post production.  Remember that this podcast is just part of what the New York Jazz Workshop does to create jazz education opportunities in the metro New York area. Part 2 of the podcast below