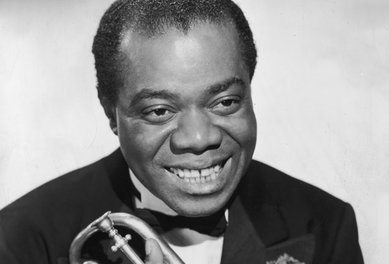 Throughout the history of Jazz, perhaps it can be said there is no more influential figure than Louis Armstrong. From the music’s early history he was able to galvanize the African, and European roots creating the form that we most recognize today. Armstrong was born August 4, 1901 into a troubled life. By the age of 12 he was placed in the Colored Waifs Home. As a teenager, he played in various bands before making his big break with King Oliver’s group, and assumed a leader role when Oliver departed for Chicago in 1919. By 1922 in Chicago, Armstrong joined the Oliver’s Creole Jazz Band. A few years later, Armstrong lent his services to various groups in New York, and he soon was to embark on an important series of recordings.

In 1927 Armstrong’s group The Hot Seven made their first recordings. These are significant because the complexion of Jazz was changing in these sides. The music had, previously been a platform for collective improvisation. Armstrong broke the mold by featuring individual solo improvisation. Further, the rhythm became more of the standard 4/4 time opposed to the 2/4 time that was precedent in the music. On “West End Blues”, Armstrong’s opening solo statement, his brassy, ripping tone creating an audible electricity in the air, and with it’s chromaticism (a system of moving in half steps), a template was provided for the bebop revolution two decades later. “Hot Like That”, featured his scat singing, and blues guitar exchanges with guitarist Lonnie Johnson; an early cross pollination of styles, also examined by Bessie Smith who featured Louis on some of her recordings. 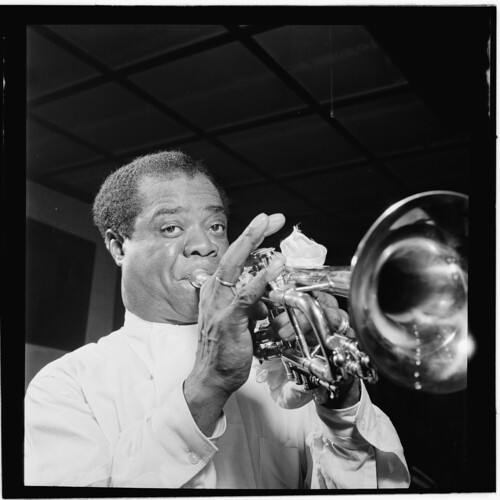 Through the decade of the 30’s, Louis Armstrong became an icon, enjoying numerous crossover successes. He also appeared in films, and while such depictions were negative and stereotyped African Americans, they heightened the visibility of Jazz in the public eye. Though Louis was dismissive of later developments in Jazz like bebop, famously referring to it as “Chinese music” he did appear with musicians like Dizzy Gillespie. By his death in 1971, Armstrong contributed mightily to Jazz’s legacy, which still looms large today, he was truly popular globally. As Miles Davis once remarked, “you can’t play anything Louis hasn’t already played”.