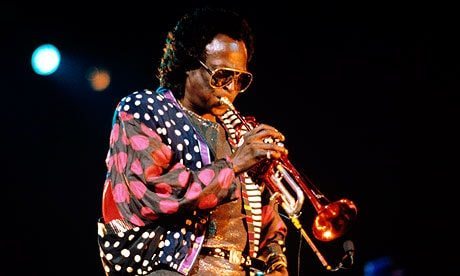 Between 1973 and 1975, Davis was exploring more directions in which he was trying to bring music back to black audiences. For him, this meant investigating a heavily rhythmic context. From albums such as In Concert At Carnegie Hall(1972) the music gained an even more obvious rock focus with several guitars, saxophonists such as Azar Lawrence and Dave Liebman, percussionist Mtume and drummer Al Foster. Miles’ use of a wah wah pedal showcased his heavy admiration of Jimi Hendrix as well as the extended electronic techniques German composer Karlheinz Stockhausen had used. By the time of the electric albums Pangaea and Agharta Miles was fully into long improvised pieces, with dense rhythms, shifting time signatures, and crowded sonic textures. As had been the custom since the early 60’s, Miles played specific phrases, cueing the band into a new tune. As readers will see below, Mtume explains the approach of that music in detail over a debate with scholar Stanley Crouch. By the mid 70’s, Miles once again struggled with substance abuse, retiring from music due to lip problems, and failing physical health. Slowly he regained form, physically and musically, aided by his third wife Cecily Tyson.

Miles returned in 1981 with renewed vigor. He was on the level of pop music stars, and a pop culture icon. He took interest in electronics and applied them to his music, returning to a simpler focus: melody. Much of his playing scaled back the heroic, intense athleticism of the mid sixties and seventies playing, and utilized much more space between the notes as he did in the fifties. He scored big hits covering Cyndi Lauper’s “Time After Time”, and Michael Jackson’s “Human Nature” to much criticism. Although the veneer of the music was different with synthesizers, drum machines and other contemporary touches, his approach of playing contemporary material was no different than his playing of pop tunes in the prior decades. “Time After Time” essayed with the same tenderness as “My Funny Valentine.” 1984’s Aura arranged by the Danish trumpeter Palle Mikkelborg harkened back to the days of the legendary Gil Evans collaborations, recast in a fresh light. Although the trumpeter was never fond of rehashing his past, there were always consistent, clear signposts which referenced earlier material; a beautiful example is during the live renditions of “Human Nature” he inserted a quote of the bridge of “Milestones” behind Kenny Garrett’s melting saxophone solos.

By 1986, Miles left Columbia after nearly fifty years and signed with Warner Brothers. One of the truly classic, albeit controversial records of this period in his career was Tutu. Almost entirely the brain child of Marcus Miller, he recorded most of the instrumental tracks using much of the then state of the art synthesizer and drum machine technology. Miles then overdubbed his parts, and created a memorable album featuring great tunes and energy. Spike Lee, famous for iconic film direction, directed the video of the title tune for Miles, and it launched much bigger things for him, roles in movies and television shows.

For many fans and critics, Miles’ final period is considered his weakest. The way to hear much of the music,from Tutu through to 1989’s Amandla and the final phase of the Columbia years is the live recordings. The music took much more chances live, particularly with Davis lending extended features to lead bassist Foley (tuning his bass as a guitar), and alto saxophonist Kenny Garrett. Garrett in particular, the entire tradition of saxophonists who played with Miles, was heard in his horn and was a spectacular supporting voice.

As stated earlier, Miles was not fond of looking back on nostalgia. However in July, 1991 he agreed to revisit the arrangements of Gil Evans at the Montreux Jazz Festival, conducted by Quincy Jones. Miles’ protege Wallace Roney assisted him by playing passages that Davis found too chops intensive to play. The event was an extremely well publicized event that perhaps, some fans hoped would be an entry to return to acoustic music. He also looked back playing older tunes in La Villette, France with a host of former bandmates including Corea, Hancock, Steve Grossman, Wayne Shorter, and Joe Zawinul. Rumors circulated that even a Second Quintet reunion were in the works.

Before his passing on September 28, 1991 from a stroke, Miles worked on Doo Bop. An embryonic recording in the Jazz hip hop genre, Miles was still eager to update his sound; though it is argued this final chapter is ultimately a failure. It is evident in the recording that neither side seemed to fully embrace each others’ dialect, but the spirit of change and co creation was strong. Certainly in the more than 20 years since, the Jazz-hip hop genre has grown in scope and authenticity, but it’s also joyous to think about where Miles may had gone next had he lived. Thank you for everything, Miles Davis.