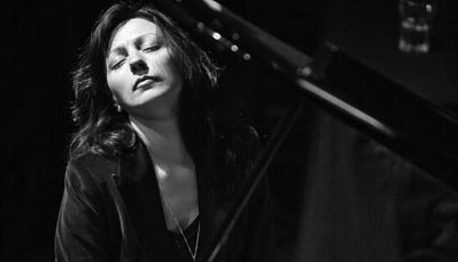 Open to all pianists, bassists, and drummers who want to learn the intricacies of the jazz rhythm section! Register Here

“…Many of the strongest composer­arranger­orchestra leaders in jazz are women. Think Toshiko Akiyoshi, Carla Bley, Maria Schneider. Amina Figarova has a chance to join their company. All she needs is an orchestra. Figarova’s compositions for small ensemble have been brilliant since at least 2005, when she released September Suite, still the deepest, most powerful jazz response to the events of 9/11…” by Thomas Conrad for Stereophile Magazine

Amina Figarova is a quite phenomenal Azerbajan born, New York based pianist and stunning composer. Her sextet is fast developing a huge reputation on the international scene. Amina has toured extensively, developing a tight­knit ensemble that, despite inevitable personnel changes, has attained a distinctive and inimitable voice by concentrating on all­original repertoire for almost 18 years. During that period, having collaborated with musicians residing in both the U.S. and Europe and having built up a circuit of welcoming venues, the Amina Figarova Sextet has triumphed at the main stage of the Newport Jazz Festival, been invited repeatedly to New Orleans Jazz and Heritage Festival, won critical and audience acclaim in Chicago, Detroit, Paris, Amsterdam — and of course New York.
Amina’s pieces strike a perfect tone, employing genuinely beautiful harmonizations, to capture fleeting thoughts that accompany those precious moments when the puzzling jostle of daily existence comes into unexpected but deeply satisfying sync.

Figarova’s deeply personal, highly evocative responses to social turmoil, distinctive personalities she’s encountered and universal transitions of life inform the music on Blue Whisper. Moods range from the haunting beauty of the titular track “Blue Whisper,” as well as “Moonrise” and “Hewa” (featuring lyrics in Swahili by Sarah Elizabeth Charles) to the straight­ ahead momentum of “Moving Forward,” “The Hustler” and “The Traveler,” to the sophisticated playfulness of “Pictures,” “Marians” and “Juno.” In “Hear My Voice,” over a martial beat and sorrowful, resolute horn choir, an eight­ year­old girl earnestly urges an end to violence world­wide and, with laughter, a request to “Let kids be kids.”