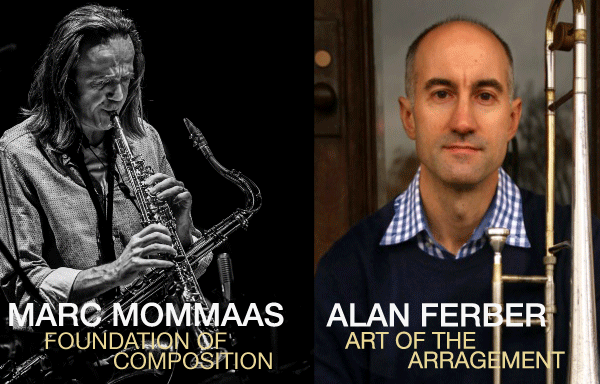 FOR THE SUMMER OF 2020 ALL INTENSIVES WILL BE ONLINE!

Learn to write and arrange your own music! In this exciting 2-day intensive, students will learn about the process of creating original jazz compositions. By analyzing works from the jazz repertoire, participants will gain new incites into the roles of melody, harmony, improvisation, and form within a variety of compositions. Students will walk away inspired and encouraged to apply these techniques to their own compositions.

Emphasis will be placed on the “writing and arranging process” and how to jump over the hurdles that often stand in a composer’s way. How do I get started on a brand new piece? How do I write for specific instrumentation/personnel? What do I do if inspiration isn’t coming to me? This two-day program will offer valuable tips and solutions for tricky questions such as these.

Topics:
-Form
-Melodic considerations
-Melodic Rhythm
-Compose your own melody over a standard chord progression of your choice
-Listen to other examples
-Two-voice writing
-Line versus Voicings
-Approach techniques
-Arranging principles
and much more….

Prerequisites:
-Able to read and write music on a basic level
-At least 17 years of age
-Some of our intensives are better suited to intermediate and advanced musicians with a minimum of a few years on their instrument; other summer intensives, such as the beginner vocal and choir, are open to everyone. More details can be discussed during registration.

Marc Mommaas made his debut as a leader in his 1999 recording Global Motion Trio with Nikolaj Hess (piano) and John Hebert (bass). In 2001 the acclaimed drummer Tony Moreno joined the group which became Global Motion. In 2003 after an extensive tour in Europe including a 5 day hit at the Pompoen in Amsterdam, the band returned to NYC and recorded Global Motion, released by Sunnyside Records. This release earned critical acclaim in Downbeat, Jazztimes, Jazzimprov, All About Jazz and numerous online platforms. This record was followed by another well received Sunnyside release titled Balance (2006), a long anticipated duo recording with pianist and longtime friend Nikolaj Hess. In 2010 he jumped into a new project born out of his extensive collaboration with drummer Tony Moreno. It became “Landmarc” the guitar project, a band with three guitars, sax, drums and no bass. The touring band included two guitarists, Vic Juris and Nate Radley. In 2013 Marc finished his solo Saxophone project “Irreversible Momentum” which started in 2009, this will be released in the fall of 2013 and in the fall Marc will record as co-leader a Ballads record with Nikolaj Hess. Read More

Alan Ferber. Three-time GRAMMY-nominated trombonist-composer-arranger Alan Ferber has been called “one of the jazz world’s premier composers and arrangers for larger groups” by All About Jazz NY.  Jazz Times magazine describes Ferber’s compositions as “inspired and meticulous” and the L.A. Weekly deems him “one of the premier modern jazz arrangers of our time.”  For the last seven years, he has been recognized as one of the leading trombonists of his generation in Down Beat magazine’s International Critics’ Poll and Readers’ Poll.  Ferber was the recipient of a 2013 New Jazz Works grant from Chamber Music America, funded by the Doris Duke Foundation.  Since 2011, he has been an Adjunct Professor of jazz studies at New York University’s Steinhardt School.

Ferber’s aesthetic prescribes a deep knowledge of the jazz tradition as a means toward meaningful innovation.  Appropriately, the Wall Street Journal describes his music as “somehow both old school and cutting edge.”  He has released eight albums as a bandleader, most recently, Jigsaw, for 17-piece big band (Sunnyside Records 2017).  Down Beat magazine listed it as one of the best CDs of 2017 and stated, “Ferber…demonstrates full mastery.  His big band belongs in the idiom’s current top tier.”  Jigsaw has also been nominated for a 2018 GRAMMY award for ‘Best Large Jazz Ensemble Album.’  Prior to Jigsaw, Ferber released “Roots & Transitions”  in 2016, an eight-movement original piece for his working nonet, from which his composition Flow was nominated for a 2017 GRAMMY award for ‘Best Instrumental Composition.’   Ferber’s 2013 release for his big band on the Sunnyside label,  March Sublime,  features original compositions and arrangements and was nominated for a 2014 GRAMMY award in the ‘Best Large Jazz Ensemble Album’ category.  Prior to that, Ferber released “Chamber Songs-Music For Nonet & Strings” (Sunnyside) which received a coveted 4 star review in Down Beat and was named one the magazine’s “Best CDs of the Year.”

Tuition:
$240 for registrations received after May 1st