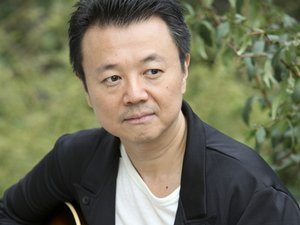 Gene Ess was born in Tokyo, and raised in Okinawa, Japan. At the age of 17, following growing up on an air force base, he came to the U.S. He came to prominence touring as a member of legendary drummer Rashied Ali’s group in the early 90’s, and has become one of New York’s most intriguing improvisers and composers. In September, he released Absurdist Theater a follow up to 2015’s Eternal Monomyth, with his band Fractal Attraction featuring Thana Alexa on vocals, Manuel Valera on piano, Yasushi Nakamura; bass and Clarence Penn on drums. The album is part of a trilogy that examines the depth of texture created by guitar and female alto voice, and the music speaks to the wide range of human experience. Mr. Ess and I also spoke about philosophy, the Japanese concept of wabi sabi, the way female musicians are perceived in jazz and classical music world among other topics. My sincere thanks to Gene Ess, and also to Kari Gaffney of Kari On Productions. For the New York Jazz Workshop Podcast I’m CJ Shearn. Peace, love, groove and keep swinging everybody!