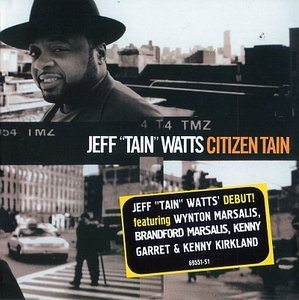 Pittsburgh’s “Tain” Watts is one of the most emulated and imitated drummers of the past thirty years, having contributed a substantial amount of new vocabulary to the jazz drumming lexicon. His debut record as a leader for Columbia, 1999’s Citizen Tain showcased him in a variety of settings, with his then employer, Branford Marsalis in his quartet, in a trio with the late great, Kenny Kirkland, and with special guests Kenny Garrett, Wynton and Delfeayo Marsalis. The tunes, including the evocative “MLK Shake Up Call” in memoriam of the 1994 Northridge earthquake which pounded Los Angeles and Southern California. Overall the albums demonstrates a compositional acumen that has grown deeper with time.

The album lead off track, “The Impaler” is significant for several reasons: it featured the reunited Wynton Marsalis quintet, responsible for his classic album Black Codes From the Underground (Columbia, 1985) with Reginald Veal replacing Charnett Moffett in the bass chair. The tune received two renditions prior on Megawatts (Sunnyside, 1991) and Michael Brecker’s Two Blocks from the Edge (Impulse! 1998) but the reading given on Watts’ album is by far the most volatile. It is a post bop vehicle in the “burnout” style, a method of operation the Marsalis’ investigated in the 1980’s which Delfeayo succinctly notes for the saxophonist’s The Beautyful Ones Are Not Yet Born (Columbia, 1991) “complete freedom in a structured environment”. John Coltrane had also experimented with in his classic quartet in the mid 1960’s.

Wynton takes the first solo in one of his finest recorded moments, playing in a style that he had not since the mid 80’s, impressive is his use of legato tones, and breath control. Branford however, takes the cake with his torrid tenor solo, over a blistering vamp incorporating a clave Watts indicated was “mirror style”where the grouping is of 2-3-3-2 , and a bass line paying homage to “Skin Tight” by the Ohio Players. Marsalis takes his solo way out, playing stream of consciousness runs, harmonics and multiphonics creating a fevered pitch over the vamp. Kenny Kirkland, in one of his final recordings, solos over the original swing rhythm, alternating with the bridge vamp used for the tenor saxophone solo, and Watts flexes his muscles over the vamp.

“The Impaler” is recording showcasing brilliant group dynamics executing a specific musical construct, and one of the great modern jazz recordings. Since then, Jeff “Tain” Watts’ recordings have only gotten richer.