Strykin’ Ahead: Dave Stryker In Conversation with CJ Shearn 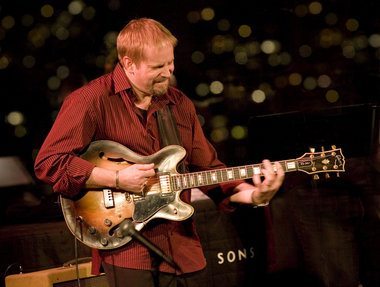 Guitarist Dave Stryker has been striking ahead as one of the best jazz guitarists on the scene for over two decades. The Omaha, Nebraska native moved to New York in 1980 and gained national prominence touring with legendary organist Brother Jack McDuff for a year, beginning in 1984. In 1986, Stryker joined the group of tenor saxophonist Stanley Turrentine, an association that lasted until the sax great’s death in 2000.

Stryker has 30 albums to his credit, and his latest is entitled Strykin’ Ahead on his own Strikezone label, a quartet date featuring Steve Nelson on vibes, Jared Gold on organ and McClenty Hunter on drums, a hip mix of originals and reworked standards. The rarely used vibraphone and organ combination was inspired by the series of recordings guitarist Grant Green made with organist Larry Young for Blue Note beginning in 1964 featuring Elvin Jones on drums. I spoke with Stryker about the new album, the musicians, and repertoire as well as guitar giant John Abercrombie who recently passed away. This interview was recorded September 1, when Strykin’ Ahead was released and Mr. Stryker was embarking on a series of gigs to promote the album.

My thanks to Dave Stryker, and Jim Eigo of Jazz Promo Services.