Rhythm for All Summer Intensive 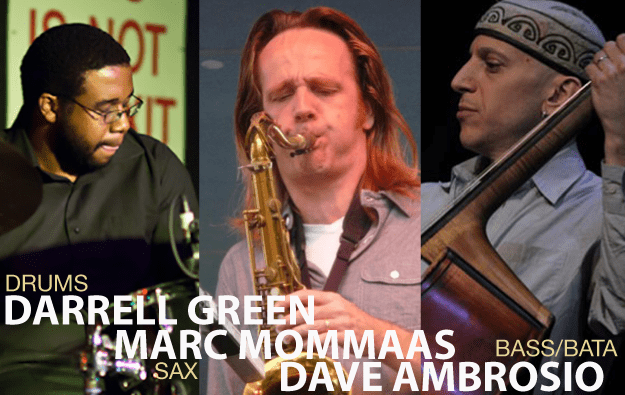 This workshop is for ALL INSTRUMENTALISTS and VOCALISTS!

About The ‘Rhythm for All’ Summer Intensive

During the ‘Rhythm for All’ Intensive, you will explore rhythm with three Jazz masters: Dave Ambrosio (bass/bata), Darrell Green (drums) and Marc Mommaas (sax). This special 3-day intensive is the perfect setting to fine tune your rhythmic awareness. This course is for all instruments and vocalists and the rhythmic language will be explored from a multitude of perspectives. This will be a wonderful learning experience, resulting in a deeper connection with rhythm, developing an inner clock, and widening your rhythmic pallet in a harmonic context.

Prerequisites:
-Previous experience playing guitar and a willingness to learn
-Instructors may ask for a recorded sample before admission
-At least 17 years of age
-Some of our intensives are better suited to intermediate and advanced musicians with a minimum of a few years on their instrument; other summer intensives, such as the beginner vocal and choir, are open to everyone. More details can be discussed during registration.

David Ambrosio is a musician who has spent much of his professional life traveling all over the world performing and teaching. While he has had some unique travel experiences, one of the most influential in his musical development happened in November 2001 when David had the opportunity to perform in Cuba with one of his collaborative projects, Grupo Los Santos, as well as Max Pollak’s Rumbatap.

During that one week stay they had the opportunity to work with many Afro Cuban folkloric music and dance ensembles in addition to attending a three day Tambor festival at the Teatro Bertol Brecht in Havana. Awestruck by the musical depth, culture and spirituality that exists in the African heritage of the Cuban people, his interest in Afro/Cuban Bata drumming began. Consequently, for the past 16 years David has been studying AfroCuban Bata drumming. His main teacher and mentor in the art of bata drumming is master drummer Carlos Gomez who, in addition to being an accomplished hand drummer, is a high priest of the Yoruba religion called a Babalawo or Priest of Ifa. David has also studied with other great masters of the bata including Miguel Bernal and Carlos Aldama.

Through years of training and intense study the Babalawo uses the ancient spiritual divination system of Ifa to assist people in finding, understanding and processing life until they experience spiritual wisdom as a part of their daily experience. As one continues to learn the intricate rhythms of the Bata drum you come to realize that it is only a small part of the beauty and transcendence of this sacred music. Read More

Darrell Green- Throughout college (Oakland) Green drove up to the Bay Area every weekend to play a trio gig at San Francisco’s Club Deluxe, which featured Marcus Shelby on bass and Howard Wiley on saxophone. In 2001 he began touring with Lavay Smith and Her Red Hot Skillet Lickers, and also formed a trio with guitarist Julian Lage and bassist David Ewell. Two years later, Green joined the Dave Ellis Quintet and performed at the Monterey Jazz Festival. He consolidated his career as a gun-for-hire, and started getting calls from heavyweights like Harris and Dr. Lonnie Smith whenever they came to town. He developed a style that’s rooted in modern post-bop, but retains elements of his gospel and classical lineage. As a soloist, Green became known for his bedrock groove and inexhaustible creativity. In 2005 Green landed a scholarship at the Manhattan School of Music, where he began a comprehensive study of jazz performance. Shortly thereafter he began working with David Weiss, saxophonists JD Allen and Sherman Irby, and the Myron Waldon/Daron Barrett Quartet. He became a sought-after musician for both session work and live shows.

Marc Mommaas- Marc made his debut as a leader in his 1999 recording Global Motion Trio with Nikolaj Hess (piano) and John Hebert (bass). In 2001 the acclaimed drummer Tony Moreno joined the group which became Global Motion. In 2003 after an extensive tour in Europe including a 5 day hit at the Pompoen in Amsterdam, the band returned to NYC and recorded Global Motion, released by Sunnyside Records. This release earned critical acclaim in Downbeat, Jazztimes, Jazzimprov, All About Jazz and numerous online platforms. This record was followed by another well received Sunnyside release titled Balance (2006), a long anticipated duo recording with pianist and longtime friend Nikolaj Hess. In 2010 he jumped into a new project born out of his extensive collaboration with drummer Tony Moreno. It became “Landmarc” the guitar project, a band with three guitars, sax, drums and no bass. The touring band included two guitarists, Vic Juris and Nate Radley. In 2013 Marc finished his solo Saxophone project “Irreversible Momentum” which started in 2009, this will be released in the fall of 2013 and in the fall Marc will record as co-leader a Ballads record with Nikolaj Hess. Read More