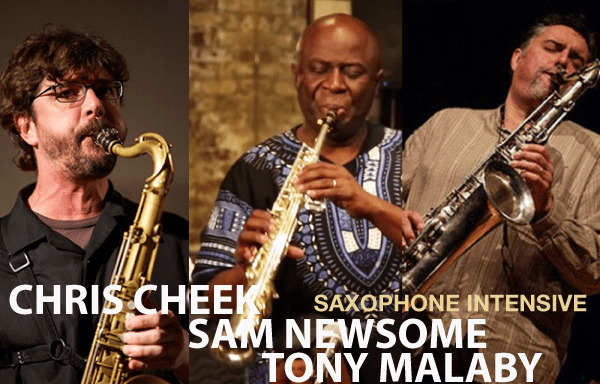 We are very excited to introduce our three-day saxophone Intensive as part of our Summer Jazz Intensive Workshop series.

About the SAXOPHONE MADNESS Intensive Program

Immerse yourself in this special three-day summer intensive taught by three extraordinary saxophonists: Chris Cheek, Sam Newsome and Tony Malaby. Each day will be led by a different faculty member offering their unique perspective on improvising, sound, technique, influences and much more. These three days will be hosted by Marc Mommaas and participation can be either live at the NYJW studio or online from your living room!

Prerequisites:
-Instructors may ask for a recorded sample before admission
-At least 17 years of age
-Some of our intensives are better suited to intermediate and advanced musicians with a minimum of a few years on their instrument; other summer intensives, such as the beginner vocal and choir, are open to everyone. More details can be discussed during registration.

Chris Cheek is one of the most sought after saxophonists in the Jazz world today, having played in the the groups of legends such as Paul Motian, Charlie Haden, Steve Swallow and Bill Frisell. As a leader he has performed with the likes of Jorge Rossy, Brad Mehldau, Steve Cardenas and Kurt Rosenwinkle. His latest CD “Saturday Songs” (on Sunnyside Records) along with his recordings (on Fresh Sound records) “I Wish I Knew”, “A Girl Named Joe”, “Vine”, and “Blues Cruise” have all received rave reviews internationally and have become favorites among players and listeners alike. He is also Co-leader of the bands “Rudder” (19/8 records), “the Bloomdaddies” (Fresh Sound) and “Reeds Ramble” (Criss Cross records).

Chris’ music encompasses a wide vista, firmly rooted in the Jazz tradition with a foot towards the unknown. As Steve Swallow and Carla Bley put it: “On the one hand, he’s the very embodiment of gentle, graceful lyricism. But he’s unable to resist the urge to subvert.  He’s a master of the sucker punch; just when he’s convinced you that things couldn’t be sweeter, he’ll play something that jolts you right back to real life, something as direct and succinct as an uppercut.  Do not trust this man!  Listen at your peril.”

Sam Newsome often works in the medium of solo saxophone, an approach for which he gained world-wide critical acclaim with his 2009 recording, Blue Soliloquy: Solo Works for Soprano Saxophone. This recording received a five-star review in Downbeat magazine.  Many of the notes and sounds used in his compositions and improvisations stem from his sound palette of extended techniques and saxophone preparations. Newsome often attaches tube extensions to the neck of the soprano that significantly changes the timbre of the instrument as well as extends the soprano’s range by an octave or two. Conceptually speaking, Newsome sees himself more along the lines of a visual artist who paints with notes and sounds rather than shapes and colors.

Newsome has also received numerous accolades for his adventurous work, including this year’s 2020 Instant Award in Improvised Music, along with fellow avant-gardists Peter Brotzmann and John Butcher. He was also named a nominee for Soprano Saxophonist of the Year by the 2020 Jazz Journalist Association. Past recognitions include the 2018 New Music USA Grant, the 2018 Alpert/Ragdale Prize in Music Composition and the 2016 NYFA Fellowship for Music Composition
Ed Enright, from Downbeat magazine, called The Straight Horn of Africa, “a modern masterpiece.” Read More

Tony Malaby, born and raised in Tucson, Arizona, has become a ubiquitous presence in the Downtown scene since moving to New York nearly two decades ago. Early sideman work with Charlie Haden’s Liberation Music Orchestra, Paul Motian’s Electric Bebop Band and Fred Hersch’s Quintet quickly established Malaby’s reputation as a versatile interpreter of myriad styles. Although he now focuses on his own projects, he continues to be an integral part of bassist Mark Helias’ Open Loose, as confirmed by the trio’s new CD, The Signal Maker (Intakt).

He currently leads a number of different ensembles, such as Novela, Paloma Recio, Tamarindo and TubaCello, all of which include a rotating roster of regular accomplices. The horn-heavy nonet Novela performs expanded versions of Malaby’s small ensemble tunes, rearranged by pianist Kris Davis, one of his closest associates. The electro-acoustic Paloma Recio translates as “Loud Dove” in Spanish, an appropriate name considering the quartet features renowned electric guitarist Ben Monder as Malaby’s primary foil, supported by Eivind Opsvik on bass and Nasheet Waits on drums. Waits also works with Malaby alongside esteemed bassist William Parker in the long-running Tamarindo trio, one of the saxophonist’s most intrepid endeavors.

The one constant in Malaby’s instrumentally diverse efforts is his instantly identifiable sound; doubling on tenor and soprano, Malaby possesses a distinctively burnished timbre across a wide dynamic range. He is capable of incredible restraint, eliciting diaphanous ruminations on the big horn that hover in the hushed tonal range of the flute, while just as easily summoning blistering torrents of overblown multiphonics that transcend the horn’s physical limitations, evoking all manner of metallic distortions. Even on the notoriously difficult soprano, he executes sinuous lines without invoking John Coltrane or Steve Lacy, two of the straight horn’s most often imitated masters.

Student will normally organize small groups or go check out some concerts. See “Fun Evening Activities” in the General Information page for more details. There will be opportunities for every student to perform outside of the school, more details coming up soon.