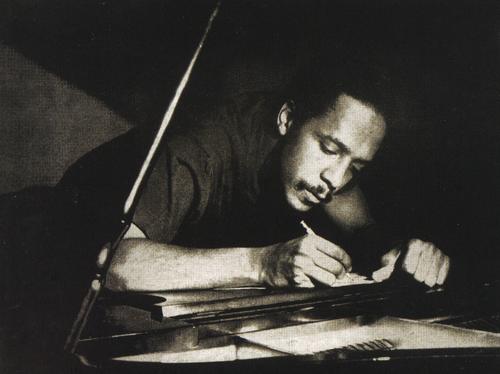 The shift from swing to bebop was heavily changing the jazz landscape, the music ceased popularity with a mainstream audience. One of the leaders in the new bebop style was the brilliant pianist Earl Rudolph “Bud” Powell. Born in Harlem, on September 27, 1924, in a relatively brief amount of time, Powell added enormously to the vocabulary and grammar of pianists, an innovation felt to the present time. Powell was classically trained, coming from a musical family that also included his brother Richie (known for his stint with Clifford Brown in the fifties) and Art Tatum was an early influence.

His first professional gigs came with the trumpeter Valaida Snow, and his first appearances on record were with Duke Ellington alumnus, trumpeter Cootie Williams. During this period, Powell was attracted to the innovations being explored at Minton’s Playhouse with Charlie Parker, Dizzy Gillespie, Thelonious Monk, spawning bebop. Earl Hines is credited with being the first pianist to imitate horn lines in the manner of Louis Armstrong, but Powell took it further by emulating the single note approach of Parker and Gillespie to the piano, thus opening a new vista of options a pianist could explore by improvising. Upstate New York music educator, Jerome E. Bachman has noted Powell’s harmonic innovations to the prior stride pianists; stating “bop pianists would use chord extensions (or altered extensions) in their left hand voicings. For example, before bop, a pianist playing a C7 chord would typically play just the four notes of the C7 chord (C-E-G-Bb) in the left hand. A bop pianist would leave the root and fifth out (the C and the G) and play something like E-A-Bb-D. The A and the D aren’t even IN a C7 chord! They are, respectively, the 13th and the 9th. That’s a C13 voicing. … or E-Ab-Bb-D#, which is a C7(#9/b13) voicing. Both of those voicings still FUNCTION as C7, but are “extended” beyond the 7th.” Unfortunately, during his tenure with Williams, in January, 1945 an inebriated Powell was beaten by police officers, his behavior post trauma led him to be admitted to psychiatric facilities. Powell’s mental illness would plague him until the rest of his life, often receiving electro shock treatments for depression, and he found himself with an increasing dependence on drugs and alcohol.

In 1947, Powell made his first recording for Roost. with Curly Russell on bass and drummer Max Roach, His two volume set The Amazing Bud Powell (Blue Note, 1951) is generally considered to be some of his finest work, featuring some of his best known compositions including “Glass Enclosure” (inspired by his Bellevue hospitalization), and “Un Poco Loco”. Powell recorded massive amounts of material during this span issued on a variety of labels, also ranking amongst his best work. Powell may have been recording some of his best work between 1949-1953, but the effects of the mental difficulties associated with his resulting treatments were taking their toll.

By 1959, the pianist moved to Paris, France, following several hospital stays. Powell experts have acknowledged much of his playing by this period was heavily diminished compared to his leader recordings, and groundbreaking work with Parker; however there are notable exceptions to this consensus. One of them is Paris Jam Session (Emarcy, 1959). Powell sat in with Art Blakey’s Jazz Messengers for two of his most loved bop standards, “Bouncing With Bud”, and “Dance of the Infidels”. He is in remarkable form, with inspired solos and comping behind the soloists–a unique dynamic to these performances is the very common language shared by rest of the group, contrasting with Wayne Shorter’s tenor using bop as a base, but seeking individualized vocabulary outside of that vernacular. A recent “official” release from the Japanese Marshmallow label of a 1957 Birdland engagement intended for release on Roost, is also thought of as some of Powell’s finer late period work. A 1962 performance from France’s Blue Note club, on Dreyfus records, is also quite good. Despite his reliance on substances and continued psychiatric treatment, there were always flashes of what made Bud Powell such a genius.

Bud Powell’s death from poor health and alcoholism on July 31st, 1966 robbed the world of creative brilliance. Powell’s impact was felt among many of his contemporaries, and later pianists such as Chick Corea, acknowledge him as a major inspiration. Corea’s album Remembering Bud Powell (Stretch/Concord, 1997) made with an all star band comprising trumpeter Wallace Roney, Kenny Garrett’s searing alto saxophone, Joshua Redman on tenor, with Christian McBride and Roy Haynes rounding out the rhythm section, feature some fresh looks at many Powell compositions. Much of Corea’s recent trio work contains much of Bud’s impish humor, and joy of creation. Bud Powell’s compositions and playing will always remain effervescent and timeless.

One thought on “Bud Powell”