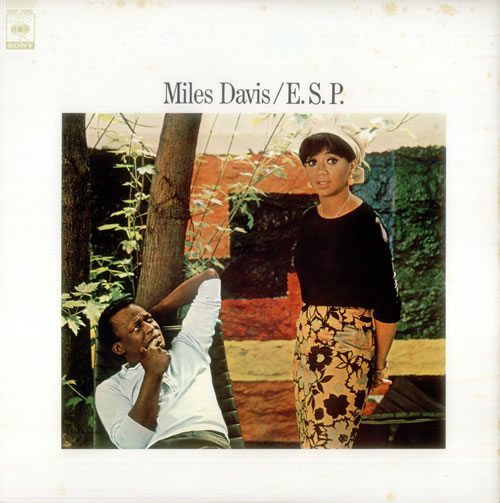 The time period of 1945-1965 contains four distinct stylistic shifts– bebop, cool jazz, hard bop and the free jazz styles that include literally hundreds of noteworthy performances. Choosing prime examples from what has been recorded is always a difficult task, but here is another as we continue in our series of essential recordings in jazz. Timings in the recordings are provided as a guideline for musically interesting passages.

The album E.S.P. the first to be released by the Second Quintet, of all original material remains striking, and refreshing to this day. Wayne Shorter’s 32 bar ABAC form original was the first composition to be cut at the session, and sets the tone for the exploratory spirit in which the group would explore over the next 4 years. Saxophonist and producer Bob Belden insightfully writes in his analysis contained within Miles Davis Quintet 1965-1968: The Complete Columbia Studio Recordings (Columbia/Legacy, 1998) “The 32 bar melody hovers around the interval of a perfect fourth, an interval that is naturally ambiguous. The harmony moves from parallel motion (E7+9 Fmaj7 E7+9 Ebmaj 7 D7+9 Eb7+9 Fmaj7) into a traditional cadential release (Dmi7 G7 Gmi7 Gbmaj7 for measures 13-16 and Db7 C7 Gbmaj7 Fmaj7 for measures 29-32).” The solos function like a relay race , a device popular with this group, as the listener can Hancock echoes the last phrase played by the trumpeter. However it is Miles’ six chorus solo the merits special mention.

Miles athleticism, reflects even moreso than his fifties work, the influence of his mentor and idol Dizzy Gillespie in it’s range. When some aficionados infer that Miles was a technically inferior trumpeter, this solo is the perfect counter argument to that spurious claim. Davis uses one of his favorite devices at 2:35 which has since become standard vocabulary in the jazz trumpet lexicon, and marvel at his breathtaking glissando up to A at the top of the sixth chorus. minute later. Drummers who are studying Tony Williams will hear the stylistic leap between 1965 when he was primarily playing pulse with choice accents, and later Davis recordings Nefertiti (Columbia, 1967) is massive, by the time of Nefertiti he was constantly feeding the soloists, pushing them to the brink of dazzling chaos. A perfect example, if you own the above mentioned box set is to listen to all the takes of “Hand Jive”, all different and fascinating to hear how Williams, pushes, and pulls time, and interacts with the soloist, as compared to his pulse playing on “E.S.P.” As far as the studio recordings go, Tony’s signature 4 beats on the high hat was in place by Miles Smiles, though if one listens to Miles Davis: The Complete Live at the Plugged Nickel 1965 (Columbia/Legacy, 1995) he is using the technique there as well.

The musical language of Shorter’s composition helped set the standard vocabulary of most mainstream jazz records today. The young lion movement of the mid 1980’s spearheaded by Wynton Marsalis used this mid 60’s Miles music as a jumping off point, when the music was largely neglected in the years prior, sparking a widespread re investigation of this music. Several of the musicians that came up in the Marsalis generation and after cite this mid 60’s Davis music as prime influence. Miles would take this style of playing to the furthest edge possible. with his quintets of 1969 and 70. h Steve Grossman replaced Shorter after March of 1970, with the rhythm section of pianist Chick Corea, Dave Holland on bass and Jack DeJohnette pushing the material even further into free jazz territory.