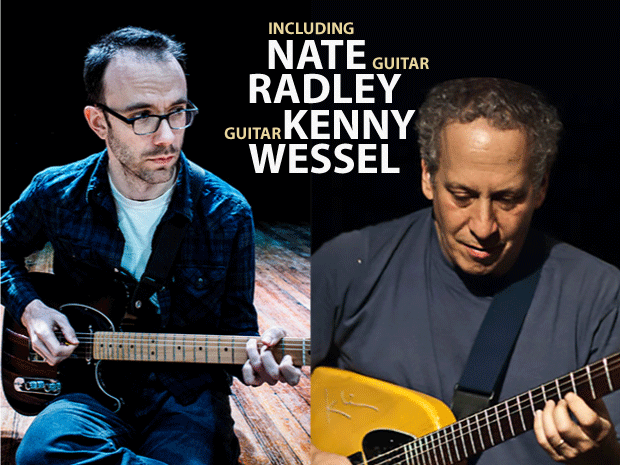 This summer clinic guitar intensive is led by TWO of the world’s leading jazz guitar voices.

During the Guitar Summer Intensive, you will learn jazz guitar with two guitar masters:
July 26-29: Kenny Wessel and Nate Radley (2 days each).

This special 4-day intensive is the perfect setting to fine tune your improvisation, harmony, and technique. Along with special guest, Marc Mommaas, this workshop is an absolute must for serious jazz guitarists.

Prerequisites:
-Previous experience playing guitar and a willingness to learn
-Instructors may ask for a recorded sample before admission
-At least 17 years of age
– The Guitar Summer Intensive is better suited to intermediate and advanced musicians with a minimum of a few years on their instrument. More details can be discussed during registration.

Kenny Wessel, a versatile, sensitive and soulful guitarist and composer, has performed in 27 countries. He toured with revolutionary jazz artist Ornette Coleman for over 12 years as a member of Prime Time, Ornette’s groundbreaking ensemble. Kenny can be heard on Coleman’s CD, Tone Dialing. Performing Ornette’s “Skies of America,” Wessel has appeared with Kurt Masur and the New York Philharmonic and London’s Philharmonia Orchestra. A vital and personal voice on the jazz guitar, he has also worked with Donald Fagen (featured guitar soloist on Fagen’s Morph the Cat), David Liebman, John Abercrombie, Karl Berger, Debbie Harry, Gloria Lynne, Adam Rudolph and others from the jazz, pop and world music spectrum. A dedicated jazz educator, Wessel currently teaches at LIU, CCNY, and Western Connecticut State University, in addition to leading ensembles at the New York Jazz Workshop. Kenny Wessel´s Bio

Nate Radley is a guitarist and composer who as been described as “an emerging player to watch” and a “brilliant… player on the New York scene.” He can be heard with a variety of collaborative projects and as a sideman in numerous bands both in the New York area and around the world. He currently is a faculty member of the Berklee Conservatory.

Nate has over ten years teaching experience, and in addition to teaching at the New York Jazz Workshop he currently teaches jazz guitar, music theory, and jazz ensembles at the Center for Preparatory studies in Music at Queens College, the Berklee Conservatory and private guitar lessons at the Bloomingdale School of Music. Nate has also taught clinics at high schools and universities throughout the United States.

GUEST: Marc Mommaas – Marc made his debut as a leader in his 1999 recording Global Motion Trio with Nikolaj Hess (piano) and John Hebert (bass). In 2001 the acclaimed drummer Tony Moreno joined the group which became Global Motion. In 2003 after an extensive tour in Europe including a 5 day hit at the Pompoen in Amsterdam, the band returned to NYC and recorded Global Motion, released by Sunnyside Records. This release earned critical acclaim in Downbeat, Jazztimes, Jazzimprov, All About Jazz and numerous online platforms. This record was followed by another well received Sunnyside release titled Balance (2006), a long anticipated duo recording with pianist and longtime friend Nikolaj Hess. In 2010 he jumped into a new project born out of his extensive collaboration with drummer Tony Moreno. It became “Landmarc” the guitar project, a band with three guitars, sax, drums and no bass. The touring band included two guitarists, Vic Juris and Nate Radley. In 2013 Marc finished his solo Saxophone project “Irreversible Momentum” which started in 2009, this will be released in the fall of 2013 and in the fall Marc will record as co-leader a Ballads record with Nikolaj Hess. Marc Mommaas´ Bio