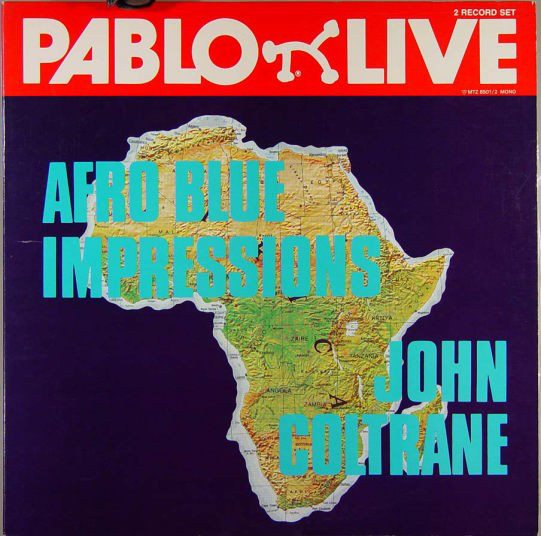 Africa’s impact on jazz has been huge.  Despite the form having a short history of one hundred years, a lot of ground is covered. One of the biggest aspects also touched on in the New York Jazz Workshop blog post: All Jazz Is Fusion: by CJ Shearn is how all the African, European and Latin origins blend in one pot.  The smeared half valve effects of Lee Morgan’s trumpet are reminiscent of the sound of African singers, and the rumbling toms rhythms of Art Blakey seemingly conjuring drum choirs.  Blakey’s use of African rhythmic influences are legendary,  his series of Blue Note albums  Orgy In Rhythm (1957), Holiday For Skins (1958) and especially the cult classic The African Beat (1962) with extended percussion groups are incredibly innovative, and are important looks at fusing jazz and African sensibilities together, preceding Max Roach’s M’Boom group.  The drummer’s love for African sounds, is belied by his famous quote in which he dismisses the direct impact of the country on the music “Jazz is known all over the world as an American musical art form and that’s it. No America, no jazz. I’ve seen people try to connect it to other countries, for instance to Africa, but it doesn’t have a damn thing to do with Africa.”  In a sense the drummer was correct in that jazz is purely American as a consequence of cultural melange, but the influence of the continent is vividly present in the majority of his music, as well as the genre as a whole.

Reflecting on the opinion of fellow trumpeter  Herb Alpert, who felt that the typical head-solo-head format was old fashioned, Wallace Roney passionately reinforced in a 2016 Facebook post that this classic method of jazz performance is directly descended from African tradition.  He observed: “Has he ever seen a African Drum Choir? The drummers all play the theme together, and swinging it as they all play this theme, then one drummer comes out, steps out of line and solos while the rest play joyously behind him! Then when he finishes he goes back in the line and another soloist comes out and plays. Then another, and when they finish they all go and take the theme out and that’s finished! Just like if Miles and Trane and the trio plays the melody then Miles steps out and take his solo, and the finishes, go back and Trane takes a solo, then Red! This is African!!! This is what the African Drummers are doing! Then they start up another piece and they do the same format. It’s ritualistic and spiritual! Everybody gets a chance to speak or say something on the tunes!!! You see? And when we were brought to this country against our will, the music was our way to speak and pray and lift our spirits to keep them from being broken!!! And we kept this, our tradition and concept in our music no matter how the music evolved! The music called Jazz is basically the same as the African Drum Choirs only played out on band instrument!!!”  Roney’s keen observations are right on the money because the interactions and solos in jazz directly relate to how African drum groups perform, the DNA line is clear, and extends right through to hip hop.

Other elements, such as collective improvisation, call and response and uses of portamento effects are also great ways in which the African influence is carried over.  Miles Davis’ “So What”, with it’s familiar two note theme played by Paul Chambers, being echoed by Bill Evans’ piano then the horns is a perfect example.  Other great instances are the utilization of contrasting independent lines that appear in New Orleans or free jazz pieces, or the wide swooping of the trombone, in New Orleans style ensembles.

If you are intrigued by the African origins of jazz and would like to know how it directly relates to your vocabulary as a player, you can check out the djembe/West African drumming intensive lead by Michael Markus.  Remember, there is always something happening at the New York Jazz Workshop.