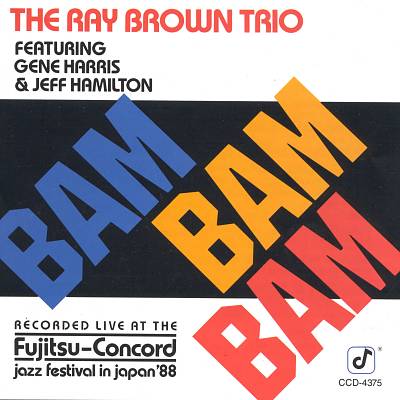 The mightily swinging, great bassist Ray Brown (1926-2002) who first came to prominence as a teenager with Dizzy Gillespie in 1946, recorded an incredible version of Gershwin’s well trodden “Summertime” on his Concord album Bam, Bam, Bam (Concord Jazz, 1988). The date was recorded at the Fujitsu-Concord Jazz Festival in Japan with his famed trio featuring pianist Gene Harris (1933-2001) and drummer Jeff Hamilton. The Brown-Harris association yielded many albums, and the pianist pretty much is the leader on this album in all but name. The bassist encouraged Harris to come out of semi retirement in the mid 70’s after a disastrous run with Blue Note that decade, following the classic albums he recorded in the late 1950’s through early 70’s with the Three Sounds. Beginning in 1985, Harris went on to record what is widely considered to be the finest music of his career for Concord.

The standard is a feature for the pianist’s greasy, blues drenched playing. The reason this track makes the list of essential Small Group Jazz Performances is because it is a perfect example of a tight group dynamic and effervescent swing. Harris builds his intro from a whisper to a bluesy incantation, and the band shifts from ballad tempo to double time. After a Brown solo, Harris takes the music to church, with a gospel call and response. The group transitions into boogie woogie before taking the tune out to raucous audience applause.

This is a perfect tune to learn subtlety, dynamics and how to swing smoothly. The standalone CD is out of print and commands hefty collector’s prices, but the album is readily available as part of a 2 CD set combining this album with The Red Hot Ray Brown Trio (1985) entitled Live From New York to Tokyo (Concord Jazz, 2003) with the former album, another wonderful example of piano trio playing. Incidentally, the same November-December 1985 engagement at the Blue Note in New York City produced Harris’ comeback album, The Gene Harris Trio Plus One with the same trio consisting of Brown, drummer Mickey Roker, and Stanley Turrentine added to the group. The album has some of Harris and tenor saxophonist Turrentine’s (1934-2000) finest recorded playing, despite the pair having not recorded since 1960.