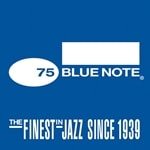 Blue Note Records, now celebrating its 75th year, has always been a label that has been important in my listening as a fan and collector of jazz. From the time I was 2 years old, and heard an United Artists era Blue Note vinyl copy of Jimmy Smith’s The Sermon, and Midnight Special, I was hooked. A few years later when I could handle records, as well as a four year old could do- my mom gave me those albums, (somewhere there is photographic evidence of me playing one of the Jimmy Smith LP’s on a Fisher Price record player!) and I rapidly developed an interest in the catalog, by reading the album liners and seeing the pictures of other albums available on selected titles. Another reason I was drawn to Blue Note was the fantastic covers with graphic design of Reid Miles and photos by Francis Wolff and the iconic whole note and bar line logo presented in different colors on the front covers. As an aside the United Artists era logo on the with the stylized “b” in either white or black endlessly fascinated me on the turntable, imagine my horror, when I discovered at 8 years old, that wasn’t the “classic” logo, makes me laugh today.

Smith was the first artist whose Blue Note catalog I began to investigate, I can say I have heard and collected everything Jimmy recorded for the label, I spent years trying to find the Japanese only releases of Cherokee, Trio+ Lou Donaldson, and (all recorded in 1957 but unreleased at the time), I finally managed to grab them about 5 years ago, I let go of a fairly routine session, 1963’s Bucket, as Jimmy completed his Blue Note contract, but through everything he recorded, there is a consistent quality to the music. As I entered my teenage years, at the insistence of a life long friend, I started devouring Art Blakey’s output for the label, which is again, phenomenally consistent. As the CD era wore on, after amassing all the label essentials like most hardcore classic era Blue Note fans, I started adding titles that are relatively obscure, such as the infamous Blue Note 1568; the catalog number for Hank Mobley Quintet , (contained within the saxophonist’s Complete Fifties Blue Note Sessions on Mosaic) all four albums released by tenor saxophonist, Harold Floyd “Tina” Brooks, one of which, 1960’s True Blue saw release in his life time, Bobby Hutcherson’s magnificent Live at Montreux, among many others.

Blue Note has several gems spread out among the controversial mid 70’s period, when Blue Note was run by George Butler in the United Artists era, Texas based tenor saxophonist Jim Sangrey noted the tremendous changes in that decade in a 2008 jazz forum post: “The whole Blue Note Hits A New Note thing was enormous in terms of “push” (i.e. -marketing). You could sign up for a freakin’ newsletter for cryin’ out loud, in case you wanted to know how chapped Bobbi Humphrey’s lips were or weren’t at her last gig, I guess…This wasn’t intended to be just a co-opting of a label’s name, this was a hoped for movement, a redefining of a legacy/brand name/whatever. And almost all of it was crap and/or repetitious redoings of a formula that had worked one time. There was no “rebuilding” or “redefining”, just cheap opportunistic riding of a formula and farming out of work to slicksters, who did what slicksters do – make slick music for ready, and short-term, consumption. The only two “serious” artists left on the label were Hutch & Horace. The former’s output began to be produced (to lessening effect as time went by, in my opinion) by Dale Oehler (Butler again being “Executive Producer”), the latter’s work shifting from Butler w/Marcus to Silver w/o any noticeable change, so I think this was one of those ‘stay out of the way’ dynamics. And they got less and less push as time went by. Silver’s was the very last release of new, original material on Blue Note before it went inactive, and believe me when I tell you that it was released damn near in a vacuum.

All “style” & no substance. The covers got prettier and prettier while the music got emptier & emptier. And that’s not just a sign of the times either, since, as noted earlier, you can (and some did) make “commercial”, “jazzy” music that is not as totally devoid of content as most of this effluvia was.

I’ll give this much to Butler’s Blue Note though – it laid the groundwork for GRP, since Dave Grusin & Rosen became an active production team there. So if you want some, any, kind of “lasting legacy” from it all, there it is, and you can have it. “

Granted, several of these albums in the intervening years have become highly regarded by DJ’s and hip hoppers, such as the Mizell Brothers produced albums for Donald Byrd, and flutist Bobbi Humphrey, and the first few records by acoustic guitarist Earl Klugh which were produced by Dave Grusin and Larry Rosen. For fans of the classic 1954-68 era there is very little of interest in many of the seventies titles because the shift as Sangrey observed became more about a product which catered to a different audience, as opposed to the artistic/commercial balance of the material produced by Alfred Lion, then later, Francis Wolff, and Duke Pearson.

Today, through the leadership of industry veteran Don Was, (who had hits with the band Was/Not Was took over for Bruce Lundvall, one of the true champions of jazz) Blue Note’s aim has followed the credo of label founders Alfred Lion and Frank Wolff, recording singular talents, and much like the “Blue Note Hits A New Note” campaign of the 70’s the general tenor of new releases hits a wide cross section, but musically at a much more satisfying level. This list of many wonderful titles I have compiled from the label’s entire history comes from many years of listening, and several of them are handpicked. While quite a few of these titles have gone in and out of print on LP and CD over the years, Was has indicated that the entire catalog is planned to be available digitally, and throughout this year and the next, a 75th anniversary program of affordable vinyl reissues directed at an new generation of listeners comprises essential titles, a few lesser known ones (of which this list includes many) and new releases.