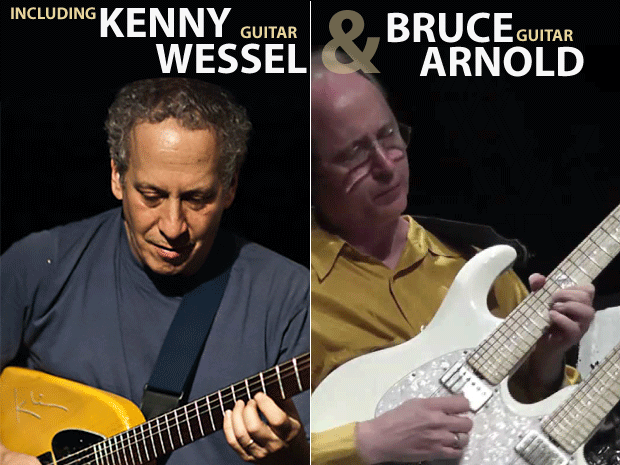 This summer clinic guitar intensive is led by TWO of the world’s leading jazz guitar voices.

This special 3-day intensive is the perfect setting to fine tune your improvisation, harmony, and technique. Along with special guest, Marc Mommaas, this workshop is an absolute must for serious jazz guitarists.

Prerequisites:
-Previous experience playing guitar and a willingness to learn
-Instructors may ask for a recorded sample before admission
-At least 17 years of age
– The Guitar Summer Intensive is better suited to intermediate and advanced musicians with a minimum of a few years on their instrument. More details can be discussed during registration.

Kenny Wessel, a versatile, sensitive and soulful guitarist and composer, has performed in 27 countries. He toured with revolutionary jazz artist Ornette Coleman for over 12 years as a member of Prime Time, Ornette’s groundbreaking ensemble. Kenny can be heard on Coleman’s CD, Tone Dialing. Performing Ornette’s “Skies of America,” Wessel has appeared with Kurt Masur and the New York Philharmonic and London’s Philharmonia Orchestra. A vital and personal voice on the jazz guitar, he has also worked with Donald Fagen (featured guitar soloist on Fagen’s Morph the Cat), David Liebman, John Abercrombie, Karl Berger, Debbie Harry, Gloria Lynne, Adam Rudolph and others from the jazz, pop and world music spectrum. A dedicated jazz educator, Wessel currently teaches at LIU, CCNY, and Western Connecticut State University, in addition to leading ensembles at the New York Jazz Workshop. Kenny Wessel´s Bio

Nate Radley is a guitarist and composer who as been described as “an emerging player to watch” and a “brilliant… player on the New York scene.” He can be heard with a variety of collaborative projects and as a sideman in numerous bands both in the New York area and around the world.

Nate has over ten years teaching experience, and in addition to teaching at the New York Jazz Workshop he currently teaches jazz guitar, music theory, and jazz ensembles at the Center for Preparatory studies in Music at Queens College and private guitar lessons at the Bloomingdale School of Music. Nate has also taught clinics at high schools and universities throughout the United States.

Bruce Arnold’s passionate pursuit of new ideas and applications for his beloved six-string instrument has taken him from the minimalist landscapes of Sioux Falls, South Dakota to the bustling city of Boston, where he studied and later taught at the Berklee College of Music, to the hallowed halls of Princeton University, where he taught for 30 years, retiring in 2019. Along the way, the music educator and author has managed to document his innovative ideas for guitar on a series of potent recordings that explore the notion of applying highly complex 12-tone theoretical constructs and serial methods to modern American improvised styles. As he wrote in the liner notes to his ambitious 1996 debut recording, Blue Eleven: “All of the work reflects my goal to achieve a balance between emotional expression and formal exploration.”

Throughout his impressive body of work over the past 20 years, Arnold has deftly pulled together a myriad of musical influences ranging from Messiaen, Schoenberg and Webern on the contemporary classical side to Bill Frisell, Pat Metheny and John McLaughlin on the modern jazz guitar side. Furthermore, he has laid out his ideas in clear, concise fashion in the 52 instructional books that he’s written on ear training, theory and technique (including his mammoth, 700-page “The Sonic Resource Guide”). His latest educational outreach endeavor is “Bruce Arnold’s Jazz Guitar Summit NYC,” a series of guitar instructional videos that he oversaw for TrueFire Video (www.truefire.com) which break down specific techniques for aspiring players. Such celebrated New York-based six-stringers as Jack Wilkins, Leni Stern, Sheryl Bailey, Peter Leitch, Mimi Fox, Brad Shepik, Peter McCann, Serbian-born classical guitarist Dusan Bogdanovic and other prominent players were recruited by Arnold for these enlightening instructional videos. As he explains, “This video series is an outgrowth of the New York University Summer Guitar Intensive that I headed up for six years. All of these people were coming in and doing clinics for the students in this program I established, and I just thought, ‘This is amazing! We need to document this.’ These are all great players with a lot to offer to aspiring guitarists who are looking to improve their playing significantly. It’s just a treasure trove of information for guitars of all levels.”

As for his own music, Arnold continues his various applications of the classical based pitch class set theory. explains. “This is something that I got into in the early ‘90s,” he explains. “When I was living in Boston, I had been playing in straight ahead jazz groups, fusion groups, rock groups, metal groups, and then when I moved to New York City in 1988 I started doing working with this band Spooky Actions where we played music by Messiaen, Webern and Schoenberg. And since then, this has actually been my baby — this whole pitch class set method. So now when I improvise, whether it’s on a jazz standard like ‘Stella By Starlight’ or McCoy Tyner’s ‘Passion Dance’ on a Webern piece or whatever, I’m using the pitch class sets that they used in the composition. That’s really my thing.”

Arnold’s focus on pitch class set theory since 1990 came after years of drifting between various styles of guitar playing. “When I was in Boston I was like the #1 call guitar player in town. It was like, ‘Oh, you want jazz? You want country? You want free improv?’ Whatever they wanted, I’d just do it. When I got to New York my attitude was, ‘I don’t want to do that anymore. I want to do something that expresses me!’ And that’s when I started exploring this hexatonic thing that McCoy Tyner was using, this idea of using two triads. And when I started teaching at Princeton, I began to realize that Schoenberg and Webern were doing the same thing, just with different sets of notes.” That eureka moment led 1996’s Blue Eleven, where he applied 12-tone constructs to a series of solo and trio “Variations.” After forming Spooky Actions in 1998 with saxophonist John Gunther, Arnold dove headlong into that heady territory on 2006’s Retrospective, which was devoted to the music of Webern, Schoenberg and Messiaen.

GUEST: Marc Mommaas – Marc made his debut as a leader in his 1999 recording Global Motion Trio with Nikolaj Hess (piano) and John Hebert (bass). In 2001 the acclaimed drummer Tony Moreno joined the group which became Global Motion. In 2003 after an extensive tour in Europe including a 5 day hit at the Pompoen in Amsterdam, the band returned to NYC and recorded Global Motion, released by Sunnyside Records. This release earned critical acclaim in Downbeat, Jazztimes, Jazzimprov, All About Jazz and numerous online platforms. This record was followed by another well received Sunnyside release titled Balance (2006), a long anticipated duo recording with pianist and longtime friend Nikolaj Hess. In 2010 he jumped into a new project born out of his extensive collaboration with drummer Tony Moreno. It became “Landmarc” the guitar project, a band with three guitars, sax, drums and no bass. The touring band included two guitarists, Vic Juris and Nate Radley. In 2013 Marc finished his solo Saxophone project “Irreversible Momentum” which started in 2009, this will be released in the fall of 2013 and in the fall Marc will record as co-leader a Ballads record with Nikolaj Hess. Marc Mommaas´ Bio