Be Blown Away by a classic jazz recording: Art Blakey and The Jazz Messengers “A Night In Tunisia” 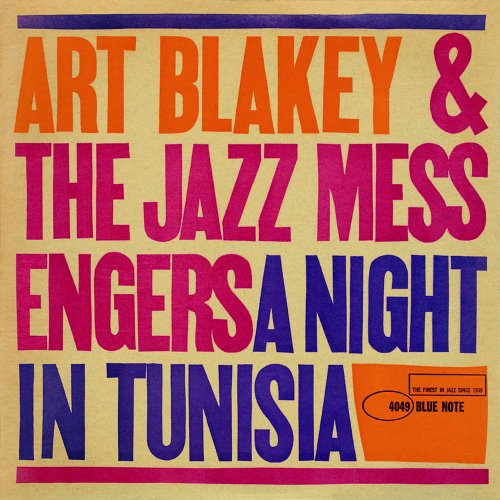 Be blown away by a classic jazz recording. As a musician who may be learning the form of jazz, or perhaps utilizing its complexity to become a well rounded musician, as a listener, because of it’s rich history, you may find recorded jazz a steep mountain to climb. Through New York Jazz Workshop and the expert faculty made up of the city’s best musicians, and writing on this blog that leans passionately towards a degree of excellence in jazz history it is simple to become abreast of some of the classic recordings in jazz. Art Blakey and the Jazz Messengers’ legendary 1960 recording of the Dizzy Gillespie bebop classic “A Night In Tunisia” is just that.

Art Blakey’s Jazz Messengers were one of the greatest ensembles in modern jazz history. Lead by the explosive exciting drummer of the modern jazz era, Blakey (born Oct. 11, 1919) who originally first used the name 17 Messengers in the late 1940’s, used the name as a cooperative with pianist Horace Silver. The pianist and drummer made several albums for Blue Note and Columbia before calling it quits as a unit in 1956. Silver went to form his own groups, taking several ex Messenger personnel with him, namely Donald Byrd and Hank Mobley. Blakey retained the name the Jazz Messengers and had several groups between 1957-1959, some transitional, some lasting such as the units with Lee Morgan and Benny Golson in the front line, and with Wayne Shorter, fresh off a stint with Maynard Ferguson’s Big Band replacing Golson. It is this line up here, with Bobby Timmons, and Jymie Merritt filling out the rhythm section that recorded Blakey’s iconic A Night In Tunisia for Blue Note in 1960.

The drummer had recorded the tune in 1957, for RCA and earlier on the legendary A Night At Birdland albums for in 1954. The latter pair of albums on Blue Note crystallized the Jazz Messenger style in all but name, the version here became a show stopper, and an arranged piece of many a Jazz Messenger set in years to come. Blakey had experimented with percussion before in a Pan African way early on for one side of the album Drum Suite, but it really took off the following year with the drum centric recording Orgy In Rhythm, that in the sea of hard bop albums Blue Note churned out proved to be an outlier in the catalog. He was always interested in the cross pollination of rhythms that could be achieved by blending different cultures on a recording, and he took this approach when heading to Rudy Van Gelder’s legendary Englewood Cliffs, NJ studio for the timeless recording of the Dizzy Gillespie standard.

A 16 bar drum intro detonates at the listener, in fact, playing at high volumes is likely to startle. Jymie Merritt enters with a bass ostinato, as the drummer solos for a few more choruses before Morgan and Shorter enter with the classic theme and interlude for 1 chorus. From there, Shorter and Morgan in that order take 2 choruses each, then the show is on for Blakey. The percussion from the other bandmates as found on the 16 bar intro returns, the insistent 2-3 clave from wooden sticks the most present. Blakey’s thunderous solo, behind Merritt’s static ostinato as heard earlier is pure magic, reflecting back to the sonic textures of Orgy In Rhythm and Holiday For Skins. Blakey flexes several pet poly rhythmic devices, his signature mambo pattern functions as a motif in between all the percussive fury.

The cadenzas by Morgan and Shorter are a legendary part of the track, and by default most of the trumpeters that followed in the Jazz Messengers reference Lee Morgan’s greasy, bluesy cadenza to which Blakey famously exhorts “blow yo instamint” and “get mad!”. Shorter’s cadenza is much more in an operatic tradition as he reaches for the highest levels of drama.

“A Night In Tunisia” is such an important track not only in the Jazz Messengers canon, but the entire history of jazz. Not only does it teach musicians learning how to function in a band situation about deep listening, but also interplay. It’s also a through composed masterpiece of composition in the arrangement. Aside from the horn solos, which in subsequent live performances the same front line would reference, Blakey’s solo is nearly completely arranged, as the album Paris Jam Session from 1959 indicates as one can hear much of the same arrangement.

If compared to the arrangement of “Tunisia” that Blakey recorded in 1954 at Birdland, the general listener or New York Jazz Workshop student will note the changes present as the music moved from bebop to hard bop in the ensuing six years. The Birdland recording definitely is more of a straight traditional bebop cooker, and by the 1960 version, there are definitely the funkier traces present that manifested when the Blakey and Silver edition of the Jazz Messengers were in full swing in 1955-56. In the bottom of this article will be links to not only the 1960 version but also the Birdland version and a special version recorded at the Mt. Fuji Jazz Festival in 1987 with the Messengers, with guests like Herbie Hancock and Woody Shaw. Augmented by a big band, and Blakey disciple, the late Ralph Peterson on second drum kit. The Jazz Messengers were a rotating door, and over the past 60 years have produced some of the most important musicians to grace the realm of Black American Music.