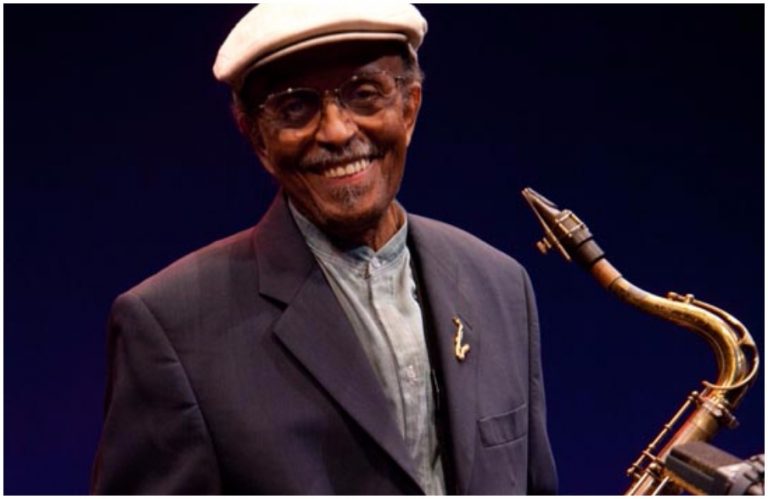 NEA Jazz master Jimmy Heath, one of the all time greats of the saxophone, and of composing and arranging left this plane earlier this week on January 19, 2020.  The trailblazers of the bebop era are slowly leaving this world, only do Barry Harris and Roy Haynes remain of those who played with Charlie Parker.  What made Heath so special, is his knack for composing and arranging memorable melodies, in an era where the small group was the lingua franca of jazz– he made a big band swing like a quintet or sextet.  The list of luminaries he was associated with was long, including Miles Davis, John Coltrane, Barry Harris, Sam Jones, Kenny Burrell, Dizzy Gillespie and Billy Higgins.  Perhaps there was no other family famous in jazz next to the Jones family, Hank, Elvin and Thad, than the the Heath Brothers, Jimmy, Percy and Albert, better known as “Tootie”.

Heath was born in Philadelphia in 1926, grew up in a musical household.  His mother sang in the church choir, and his mechanic father, was a weekend clarinetist occasionally playing in marching bands, and together the family listened to the latest music from all the great big bands of the day.   It was the sound of the big band that really captured him.and he applied the big band in a modern conception on his classic Riverside recordings in the sixties. Originally an alto saxophonist, he switched to tenor after gaining the nickname Little Bird.   Heath had written the classic composition “C.T.A.” which Miles Davis recorded in 1953, and John Coltrane in 1957, but spent the majority of the 1950’s in jail for heroin.  He cleaned himself up, and was released in 1959, remaining drug free as a staunch anti drug advocate for the rest of his life.  His big band from 1947-8 had such future luminaries as Coltrane, Benny Golson, trumpeter Johnny Coles, and Heath had also spent time in the Dizzy Gillespie band, though he was a brief substitute in the Miles Davis quintet once Coltrane left.

The Riverside recordings such as, Really Big! (1960) and The Quota (1961) found the saxophonist in his element, escaping the rut that many A-A-B-A and hard bop compositions had fallen into by that time.  Rather than resort to cliches, the tenor saxophonist utilized intriguing instrumental colors like a tenor, trumpet and french horn front line.  Freddie Hubbard, who appeared on The Quota, Heath’s third Riverside album, used a similar sounding front line with Wayne Shorter and Bernard McKinney (later Kiane Zawadi) on euphonium, on Ready For Freddie (Blue Note, 1961) but Heath’s use of Hubbard, and Julius Watkins on french horn was simply brilliant, using wonderful textures that sounded much larger than three horns.  The trend continued with Triple Threat in 1962, great melodies framed with attractive interludes and orchestration.  Really Big! featured what would be now a dream band with soloists like Clark Terry, Cannonball Adderley and Nat Adderley.

In the 1970’s Heath along with Percy and Albert formed The Heath Brothers with Stanley Cowell on piano.  Their Strata East album Marchin’ On in 1975, is famous for many hip hop groups sampling “Smilin’ Billy Suite”.  Around this time, he recorded the Xanadu set A Picture of Heath (1975) an album of hard bop classics featuring previously recorded tunes such as “Bruh Slim” in a quartet with Barry Harris, Sam Jones and Billy Higgins. The Gap Sealer (Muse, 1974) was another popular recording.

As an educator, Heath, was honest, open and eager to pass on the traditions he learned from greats.  However, he remained incredibly open minded towards hip hop and contemporary music development.he joined the Aaron Copland School of Music at City College in Queens, and his passion for education, like that of Barry Harris, was second to none.  Jimmy Heath will always be remembered in this music and he will be sorely missed..