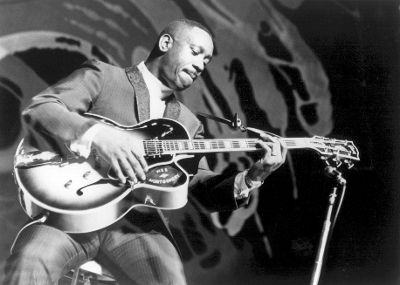 Fifty years ago  in 1968 the world lost Wes Montgomery.  His playing and revolutionary ideas are ingrained into the fabric of jazz guitar, but at the time there was simply nothing like his approach and he was the most significant innovator since Charlie Christian.  Despite the landscape filled with great guitarists like Jimmy Raney, Tal Farlow, Barney Kessel and Kenny Burrell, Montgomery’s style has been the formative template for players like the late Emily Remler, George Benson, Pat Metheny, Lee Ritenour, and popular smooth jazz guitarists such as the late Ronny Jordan and Norman Brown.  Montgomery also enjoyed tremendous cross over success with his Verve recordings (1964-1966) and for A&M/CTI (1967-1968).

Born John Leslie Montgomery on March 6, 1925 in Indianapolis, he was self taught.  He picked up the guitar at the age of 19, being able to imitate the solos of Charlie Christian from his favorite recordings.  The guitarist played with his brothers, vibraphonist Buddy and pioneer of the electric bass, Monk at the 440 club.  While holding a day job, at night the guitarist would play clubs around town such as the Missile Lounge and in 1957 recorded a Pacific Jazz date with his brothers and a then unknown trumpeter on the rise, Freddie Hubbard.

In 1959, the guitarist signed with Orrin Keepnews’ Riverside records where he would remain until 1964 where he recorded 12 albums including the classics The Incredible Jazz Guitar (1960) Bags Meets Wes with vibraphonist Milt Jackson (1961), the precursor to his future commercial successes at Verve, Fusion! The Incredible Guitar of Wes Montgomery with Strings (1962) and the classic Full House: Recorded Live At Tsubo a live club date in Berkeley, California with Johnny Griffin on tenor, and the ex Miles Davis rhythm section of Wynton Kelly, piano; Paul Chambers, bass; and Jimmy Cobb, drums. The Riverside albums showcased Montgomery as a fearless improviser who also had a strong melodic approach. In 1964, he signed with Verve where the idea was to present him to a wider audience beyond jazz.  Creed Taylor, who previously worked at Bethlehem, and Impulse! where he signed John Coltrane produced Movin Wes featuring the guitarist with a large big band playing Johnny Pate’s arrangements. The approach of presenting him in front of a big band playing concise solos and strong focus on melody was very similar to what Taylor was doing with Jimmy Smith’s Verve albums at the same time. The following year Smokin’ At The Half Note a half live, half studio affair  was purely small group with the Kelly/Chambers/Cobb rhythm section offering peerless support behind the guitarist’s  stretching out.  The album is widely considered to be the best of Montgomery’s recordings that Pat Metheny has famously called “the greatest jazz guitar album ever made”.  In 1966, the guitarist joined forces with Jimmy Smith for two albums which rank with some of the best music of their careers.

In 1967 Taylor reached an agreement with A&M to start his own subsidiary, CTI which eventually would become independent in 1970 and one of the most significant jazz labels in history.  Montgomery recorded A Day In The Life (1967), Down Here On The Ground and Road Song (1968).  The three albums rankled jazz purists to no end not only due to the fact they were some of his most successful recordings, but because they featured a minimum of improvisation, regardless of the fact it was there in spots.  In truth, the approach was not all that different from albums like Goin’ Out Of My Head (Verve, 1966) just grander with large orchestral backdrops like french horns and strings. A Day In The Life  reached number one on the Billboard Jazz chart.  The albums were predecessors to the smooth jazz genre and should be viewed as marvels of melodic invention.  Suddenly on June 15th, 1968, the guitar giant was gone after he suffered a heart attack.

In 2012 Resonance records released Echoes Of Indiana Avenue comprised of early recordings of the guitarist’s early years in Indiana.  The release sent shock waves of anticipation in the jazz community as there had not been any “new” music from the guitarist in more than forty years.  Resonance’s series of Montgomery releases have done much to add to his recorded legacy, particularly with the January 2018 release of In Paris: The Definitive ORTF Recording.  The album marks the first official release from his only European tour directly  after being bootlegged for many years from inferior sources.  The 2 CD recording ranks as one of the best sessions of Montgomery’s available.  In some ways  the level of inspiration from the tracks with Johnny Griffin added to the band with the guitarist, and the rhythm team of Harold Mabern, piano; Arthur Harper, bass; and Jimmy Lovelace, drums helps nearly supersede the Half Note recording. It’s proof Wes Montgomery’s spirit is ever present and never will be forgotten.