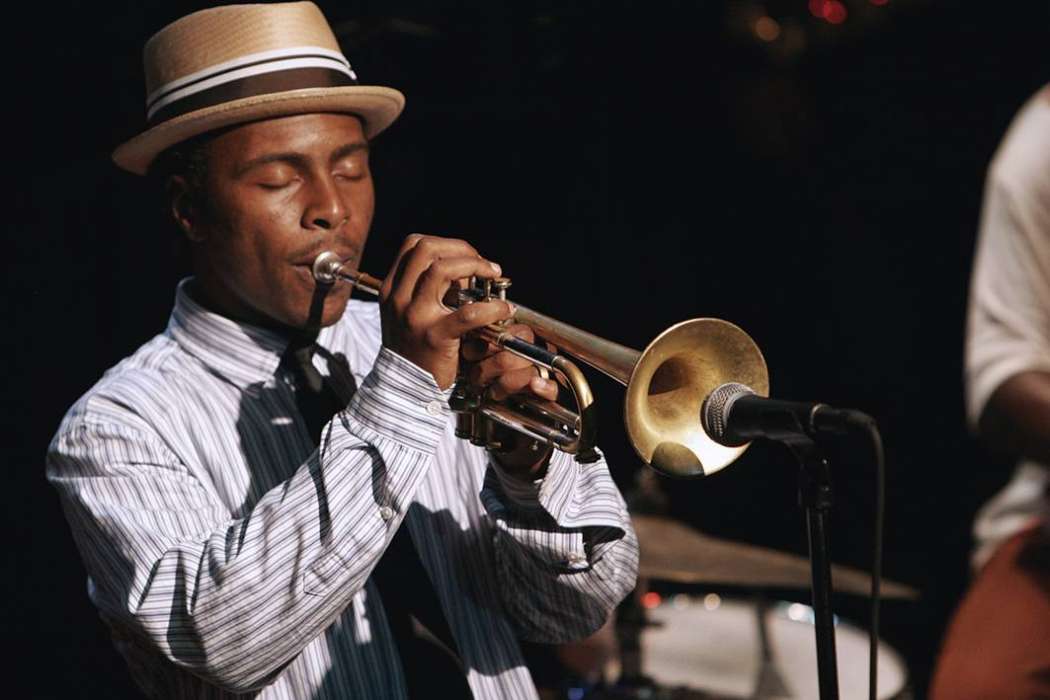 Where was jazz in the 1990’s?  The music was riding a continuum since the 1980’s, where the music was jump started in the public eye thanks to the Young Lions movement.  For some it was thought of a marketing gimmick,  but for a lot of young black musicians who arrived on the scene that decade, it was their chance to make their mark on acoustic jazz with their own experiences. Many of the foremost players in that movement such as Jeff “Tain” Watts, grew up on the funk of the 1970’s and that genre as well as pop, and rock affected the music of that era.  Much of the seeds of where jazz is today is a direct outgrowth of jazz in the 1990’s.

The Acid Jazz movement was in full swing, all the sudden record labels began to reissue a lot of rare, out of print albums from the 60’s and 70’s because of their sampling by hip hop and acid jazz artists.  Smooth jazz radio was dominant on the airwaves, and public radio stations were still a primary source for mainstream jazz.

As far as mainstream straight ahead jazz, the labels most associated with producing it were Blue Note, Columbia, Verve and Warner Brothers, with the latter two producing the bulk of many recordings.  Verve, armed with a strong roster including Herbie Hancock, Roy Hargrove, Mark Whitfield, Wayne Shorter, Jimmy Smith and Christian McBride made a lot of concept based records.  Hancock started the 1990’s with Dis Is Da Drum which updated the hip hop sounds he first explored on Future Shock (Columbia, 1983) into a full blown embrace of hip hop.  As the keyboardist mentioned in his autobiography, the project was initially supposed to be a multimedia presentation making use of then new CD-ROM technology where listeners could interact with the music, but ultimately the idea was axed.  Rather, as had been the case with “Rockit”, an innovative video was made featuring early use of motion capture technology used in video games and movies.  By today’s standards the video is rather primitive and crude, but musically the album held up to Hancock’s mission of boundary breaking.  He released The New Standard (Verve) in 1995, satisfying critics who wrongly accused him of abandoning acoustic piano, with a crack band consisting of Michael Brecker, John Scofield and Jack DeJohnette playing creatively reharmonized versions of pop songs by Sting, Prince and Peter Gabriel.  He returned to the electric arena with the Headhunters, in an album tour for Return of the Headhunters that he admits in his book, an absolute failure musically, and commercially. As a rebound follow up with 1+1, a duo with Shorter and  won a Grammy with the genre hopping Gershwin’s World.

Wayne Shorter received a mid career uplift with High Life in 1995 featuring engaging compositions and assistance from Marcus Miller. While some critics slammed the album, it remains a watershed of where jazz was in the 90’s.   A few shifts were occurring in the straight ahead landscape that would mark the future directions of the late Hargrove, Christian McBride, and Branford Marsalis to name a few.

By the mid point of the decade, artists praised for putting out hard swinging acoustic jazz albums, began turning towards the music they grew up with, including swing and funk side by side on recordings.  Hargrove, Nicholas Payton and Christian McBride all made music bearing the earmarks of funk which infuriated some writers and jazz magazines, leading some critics to charge they were making music below their abilities.  None bore the outright anger of some critics more than alto saxophonist Kenny Garrett.  When the Detroit native ex Duke Ellington Orchestra, Woody Shaw and Miles Davis band member signed with Warner Brothers beginning a six album stint with Black Hope in 1992, the album provided a complete picture of the saxophonist’s interests at the time.  The album included straight ahead, funk, and smooth jazz, and was followed up by two career defining albums Pursuance: The Music Of John Coltrane, and Songbook, an album that particularly for artists today such as Connie Han provided heavy inspiration.  Where the fury of some critics and fans began was when the altoist released Simply Said 1999.  Just as he had for Miles Davis, Marcus Miller produced a trilogy of albums for Garrett.  The album is still debated by fans to this day as being Kenny Garrett’s “sell out record” where with the exception of two tracks targeted at the smooth jazz crowd (featuring a barely recognizable Pat Metheny) the album contains nothing that would be considered on the level of tracks featured on stations like CD 101.9– there is the post bop burner “Third Quadrant”, the gospel infused funk of “G.T.D.S.” and a precursor into Garrett’s forays into hip hop with “Back Where You Started”.  The furor the album created is misdirected because it shows what Garrett always was: a musician as comfortable with the cerebral as much as making music reaching a wider audience.

The manufactured furor of an album like Simply Said points at problems with the historical jazz narrative as well.  Many famed writers in the industry for years have taken on the music as a purely historical construct, without discussing the social reasons for the music.  Authors such as Scott DeVeaux, Gerald Early  David Rosenthal and Stanley Crouch (notice another issue with the narrative– mostly male) regularly bring to the table a social and political perspective framing the music.  Looking at Garrett, the saxophonist grew up surrounded by different strains of music, Motown, the jazz funk of Grover Washington, Jr,, Hank Crawford, and Maceo Parker with straight ahead jazz thrown in, and that informed his music.  Simply Said, as well as the earlier Black Hope dealt with the essence of who Garrett was as a musician at the time. In the present decade, Garrett continues to tease out all the various strands of music, adding Indian, Persian, Japanese and Chinese.

Other important albums in the 90’s included the series of Branford Marsalis albums made with his trio, with Robert Hurst, Jeff “Tain” Watts, and his quartet with Kenny Kirkland, Hurst and Watts.  These albums further investigated the burn out style that was heard on recordings of his brother Wynton like Black Codes From the Underground. Burn out has it’s genesis in the intensity of the performances of the classic John Coltrane Quartet from 1961-1965, though the version Branford’s groups investigated was informed by the the music of the 70’s, and hip hop.  The saxophonist used irregular meters such as a 15/8  hip hop beat on 1999’s “Bulworth” from Requiem (Columbia) and dived into hip hop with the group Buckshot LeFonque, that at the time was unprecendented for a jazz musician.  Previous attempts at integrating hip hop in jazz post “Rockit”  were thought provoking at best and novel at worst.  Steve Coleman’s A Tale of Three Cities was probably the most successful, but Marsalis hooked up withh people who had serious credibility in the hip hop world such as DJ Premier, and the track “Breakfast At Denny’s” was a scathing political commentary revolving around several incidents where black customers were forced to pay a cover charge that was not enforced on any other group.  Branford, like Wynton, has always been an outspoken critic of racism in society, and the video, while partially tongue in cheek contained brutal references to America’s Jim Crow past, which unfortunately continues to this day.

Part II of this article will cover some artistic shifts coming from Europe from artists such as Nils Petter Molvaer and the Esjborn Svensson Trio that created particularly fertile grounds for exploration in the genre.  At the New York Jazz Workshop, to gain musical insight into jazz of the 90’s workshops like Jazz Improvisation and Theory II, taught by Marc Mommaas, and  Modern Jazz Ensemble taught by Sebastian Noelle  can help edify the evolution of jazz language in the 90’s.